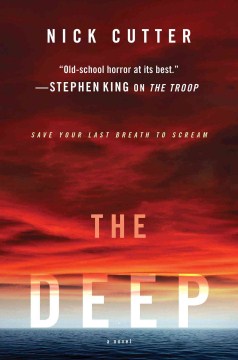 Cutter follows up his successful horror debut (The Troop, 2014) with another story rife with dread and violence. As a worldwide pandemic threatens to unhinge world civilization, Dr. Luke Nelson is summoned to his brother's research station far below the ocean's surface, where there resides a possible cure—Ambrosia, a strange organism that appears to have great healing properties. Unfortunately, Nelson's personal demons are causing him nightmares, and things only get worse when he enters the station and is greeted by the apparent insanity that reigns inside. Cutter combines a haunted protagonist, a deeply claustrophobic atmosphere, and visceral violence to create an over-the-top thrill ride for horror fans. There's a palpable tension as the story builds, and the author doesn't pull any punches with the gore either; between the descriptive hallucinations and the very real threats, readers may find themselves begging for a respite—or cheering for more of the same. Copyright 2014 Booklist Reviews.

In Cutter's second dark thriller (after The Troop), the boundary between real horror and terrifying delusion blurs. The story follows Luke as he travels to the bottom of the Mariana Trench in the Pacific Ocean where his brother and two other scientists are studying an unknown substance called "ambrosia." The scientists have not been heard from for days. Earth's human population is succumbing to a plague named the 'Gets, which causes people to slowly forget everything until their bodies no longer know how to live. Ambrosia has miracle-like healing properties, so the scientific probe is a last-ditch effort to save humanity. Luke's arrival at the undersea lab immerses him into a world where the nightmares of his past come alive, and new nightmares fill the darkness found at the bottom of the sea. Is he hallucinating, or is something driving him to insanity? VERDICT Cutter does a good job of using his characters' histories to flesh out their personalities and advance the plot. Intense scenes of gore and adult themes make this horrific psychological thriller unsuitable for teens, but these elements will appeal to readers who enjoy Stephen King or Lovecraftian stories.—Matt Schirano, Magnus Wahlstrom Lib., Bridgeport, CT

Scientists seeking a cure for a deadly plague at the bottom of the Marianas Trench suddenly cut off contact with the surface, asking only for the presence of Luke Nelson, the brother of one of the researchers. What Luke finds in the darkest depths of the sea is unsettling, hostile, and inescapable. VERDICT This menacing, often brutal tale blurs the line between reality and delusion and should appeal to fans of claustrophobic horror in the vein of Stephen King's The Shining or Adam Nevill's The House of Small Shadows. (LJ 11/1/14)

Fans of unflinching bleakness and all-out horror will love this novel. Expecting to assist in the study of a miraculous cell-regenerating substance discovered deep undersea, veterinarian Luke Nelson descends eight miles to the bottom of the Pacific Ocean. What he finds there, in a research lab warped by incredible pressure and trapped in utter darkness, is a mounting wave of physical and mental aberrations. Something down there is testing—or playing with—the scientists and their lab animals. Readers watch as Luke is unpeeled, layer by layer, and reshaped into something terrible. The novel's horror is notable both for quantity and quality. Where some writers shovel gruesome details into their fiction, Cutter (The Troop) uses a front-end loader. However, his sharp observations and choice of details keep readers from getting numbed by the accumulation of catastrophes; each new shock is freshly disturbing. Genre fans will find this an admirable addition to the list of horror novels that share its title. Agent: Kirby Kim, Janklow & Nesbit Associates. (Jan.)

Into the drowning deepGrant, Mira

The zombie autopsies: secret notebooks from the apocalypseSchlozman, Steven C.