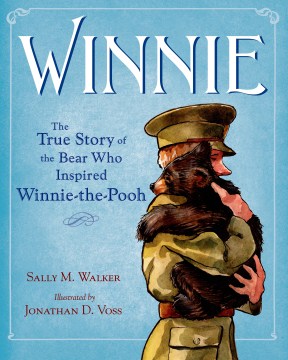 Talk about a chance encounter. Harry Colebourn of the Canadian Army Veterinary Corps happened to notice a man sitting at a train stop with a six-month-old bear. Curious, he accepted the man's $20 offer to buy the orphaned animal, and before Harry's train trip was over, he'd named it Winnie. As Harry continued his work of training war horses, Winnie followed him everywhere, nuzzling horses and crawling inside Harry's clothes to play "hide-and-seek biscuits." When time came to ship out to England, Winnie came, too, and marched with the soldiers at their camp. It was only when the troops were sent to the battlefield that Harry turned Winnie over to the London Zoo, where she became famous for her gentle nature. This story is so intrinsically appealing and delightful that the final act comes as a bonus surprise: author A. A. Milne saw the bear and was inspired to create Winnie-the-Pooh. Beautifully illustrated with humanistic, old-fashioned washes, Walker's true tale is a low-key heart warmer about an unexpected interspecies bond. Copyright 2014 Booklist Reviews.

A real bear plays a part in Winnie-the-Pooh's origin story. Military veterinarian Harry Coleburn bought a bear cub on a whim; Winnie became Harry's constant companion. When Harry was deployed, he gave Winnie to the London Zoo, where she made an impression on young Christopher Milne. Descriptive text provides the story's essentials; watercolors portray the unusual story with a mix of realism and humor. Websites. Bib.

A real bear plays a part in Winnie-the-Pooh's origin story: at the London Zoo, a bear named Winnie made such a strong impression on young Christopher Milne that he renamed his stuffed bear in her honor. This is Winnie's story. When Canadian military veterinarian Harry Coleburn saw a black bear cub for sale on a train-station platform, he bought her on a whim, naming her Winnipeg after his regiment's hometown. The bear became Harry's constant companion and the regiment's mascot. As she grew, she remained gentle and affectionate with everyone but was particularly attached to Harry, traveling with him to England. When Harry was deployed to the front in France, he made the difficult decision to give her to the London Zoo. Unsurprisingly, she became a favorite with the zoo's staff, who realized she was tame enough to allow children to meet her up close and even feed her. Walker's short, descriptive text provides the essentials of the story, and Voss's watercolor illustrations portray the unusual situation with a mix of realism and humor. Endpapers display photos of Harry, the real Winnie, and Christopher and A. A. Milne; an author's note, sources, and websites are also included. lolly robinso Copyright 2014 Horn Book Magazine.

Walker (Freedom Song) provides a concise, affecting account of the story behind the bear that sparked the creation of Winnie-the-Pooh. The heart of the story is the relationship between Winnie (short for Winnipeg) and Harry Colebourn, a WWII Canadian Veterinary Corps soldier who impulsively bought the young orphaned bear at an Ontario train station. Making a memorable debut, Voss highlights Winnie's playful personality, as well as the close bond between her and Colebourn (an especially sweet sequence shows Winnie digging through the soldier's uniform as they play her favorite game, "hide-and-seek biscuits"). Subtle sepia tones give the nostalgic pen, ink, and watercolor illustrations the feel of period photographs (actual period photos are also included). When Colebourn ships out to care for wounded horses in France, he finds her a new home at the London Zoo. This bittersweet separation has a gratifying resolution: Winnie easily adjusts to life among the other bears and makes friends with young zoo visitors—including the son of A.A. Milne, whose books made Winnie a celebrity in her lifetime. Ages 4–8. Illustrator's agent: Catherine Drayton, Inkwell Management. (Jan.)

The journey that saved Curious George: the true wartime escape of Margret and H.A. ReyBorden, Louise

Finding Winnie: the true story of the world's most famous bearMattick, Lindsay

James Herriot's treasury for children: warm and joyful tales by the author of all creatures great and smallHerriot, James

Meet the dogs of Bedlam Farm: a true storyKatz, Jon

Jimmy the joey: the true story of an amazing koala rescueRose, Deborah Lee