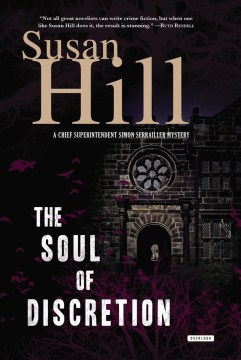 A ring of pedophiles—who snatch, abuse, film, and even kill young children—is operating out of the English town of Lafferton. But evidence has led to the conviction of only one man, the Honorable Will Fernley, son of a lord, who refuses to implicate others. So Detective Chief Superintendent Simon Serrailler goes undercover, acting as pedophile Johnno Miles, to befriend Fernley and ferret out information at the therapeutic community prison to which he's been transferred. At least psychologically, it's a dangerous mission, undertaken at a time when Serrailler's relationship with live-in lover Rachel is in question, his sister Cat is short of funds and facing a career change, and his father makes a dreadful mistake that puts his marriage at risk. Hill takes on a difficult subject in this eighth Serrailler mystery by showing how horrific these crimes are, while avoiding graphic descriptions, and by interspersing other characters' concerns to lessen the impact of pedophilia. Fans of the series won't want to miss this involving, suspenseful entry, and even newcomers will find that the backstory enables the story to stand on its own. Copyright 2014 Booklist Reviews.

The English cathedral town of Lafferton provides the backdrop for the eighth entry in Hill's taut British mystery series (after A Question of Identity). DCS Simon Serrailler accepts a dangerous undercover assignment for Child Exploitation and Online Protection. Armed only with a signal watch for contacting the outside, he enters Stitchford, a rehab prison for pedophiles, in the guise of Johnno Miles. Serrailler must play the vilest kind of criminal to gain the confidence of a particular inmate, Lord William Fernley. It's urgent that he find out Fernley's associates and the whereabouts of several missing children. As Simon drops out of sight, others deal with his absence along with crises in their own lives. His sister Cat, a widowed physician, is challenged by changes in the British health care system while raising two children alone. Simon's girlfriend Rachel, unsure of their relationship, plans to buy a local bookstore until her financial backer disappears. Simon's father Richard, a smug, demanding bully and worse, escapes to France rather than face justice. VERDICT Touching stories blend with a chillingly believable, fast-paced murder investigation. Followers of British procedurals won't want to miss this outstanding contribution, which will only further Hill's award-winning reputation.—Donna Bettencourt, Mesa Cty. P.L., Palisade, CO

In Hill's subpar eighth crime novel based in Lafferton, England (after 2012's A Question of Identity), the authorities hit a dead end investigating a child-porn ring and send Chief Supt. Simon Serrailler undercover to Stitchford Therapeutic Community Prison. At Stitchford, doctors use intense psychotherapy to try to rehabilitate sex offenders, one of whom is Will Fernley—a criminal who could lead the police to his cohorts in the porn ring, if he would only talk. Simon's job is to gain Fernley's confidence. Once inside, Simon can only communicate with the outside world via a phone disguised as a watch. Meanwhile, unbeknownst to Simon, his father, Richard, rapes an acquaintance of Richard's. The victim wrestles with whether she should press charges, but this aspect of the story remains underdeveloped. Toward the end, a couple of plot contrivances, one of which involves the watch phone, undermine the realism of the rest of the novel. Agent: Deborah Schneider, Gelfman-Schneider Literary. (Jan.)