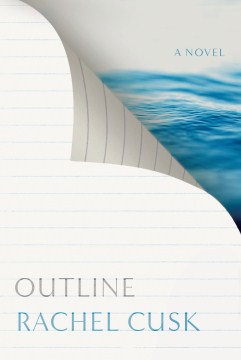 *Starred Review* An unnamed woman author from England travels to Greece to teach a short writing course. From her final luncheon before leaving London to her concluding afternoon in Athens, her life and particulars remain mostly a mystery to readers, but she relates her conversations with others in detail. She has discussions with friends and other writers, she leads her students through exercises in the classroom, and she exchanges stories with a stranger she meets on the plane and with whom she later reconnects. It is during these interactions, as others reveal their personal beliefs, hopes, dreams, and regrets, that the narrator's stubbornly obscure identity becomes gradually clearer. Though mostly a listener, her interjections, reactions, and guiding questions sketch her image for us in contrast. And as the profile of her main character grows more defined in relief, so does Cusk's underlying message about love, loss, and feminine identity in the modern world, evident not only in her story but also in its delivery. Outline is an expertly crafted portrait that asks readers to look deeply into the text for discovery. Those who accept that challenge will be rewarded for the effort. Copyright 2014 Booklist Reviews.

Whitbread First Novel and Somerset Maugham Award winner Cusk offers a narrative in ten conversations. A novelist teaching in sizzling Athens listens to the stories people weave about their lives while disclosing her own unbearable loss.

On a flight from London to Athens, two strangers strike up a conversation. The Greek businessman is as intimate and fulsome as the woman (our narrator) is restrained and observant. A teacher of writing, the woman elicits confidences from others with the perfectly timed question, the knowing nod. Also a novelist, she can easily spot the inconsistencies in her seatmate's self-serving story of broken marriages and failed businesses. After all, don't we all retool our memories to show ourselves in the best light? The woman is in Athens to lead a seminar, and over the next few days, she listens to narratives from Ryan, her fellow professor; her Greek friends Paniotis and Angeliki; and her students. From her responses to their stories, readers begin to glimpse vital truths about her character, which is actually at the heart of this original novel. VERDICT This book about love, loss, memory, and the lies we tell ourselves and others exudes a contemplative, melancholy atmosphere tempered by British author Cusk's wonderfully astute observations of people and the visual impressions created by her exquisitely structured sentences. Recipient of the Whitbread First Novel Award (Saving Agnes) and the Somerset Maugham Award (The Country Life), Cusk should be more familiar to American readers, and this novel is a solid start. [See Prepub Alert, 7/21/14.]—Sally Bissell, Lee Cty. Lib. Syst., Fort Myers, FL

On an airplane to Athens, Greece, where she plans to teach a summer school course, English writer Faye strikes up a conversation with the passenger sitting next to her, a verbose elderly gentleman. The two chat for the entire flight, and days later, Faye allows the man to take her swimming aboard his boat, where she learns about his multiple marriages and troubled children. Thus begins this brilliant novel from Cusk (The Bradshaw Variations),who shuns fictional convention and frills in favor of a solid structure around a series of dialogues between Faye and those she encounters on her travels. While dining with old friends on two separate occasions, she hears tales of literary stalkers and near-death experiences. And within her classroom, students recount their own histories: from family pets to daily routines. Though Faye often functions as the sounding board, the reader nevertheless comes to know her—divorcée, mother—through her interjections and inquiries. These 10 remarkable conversations, told with immense control, focus a sharp eye on how we discuss family and our lives. As Faye bounces from one happenstance to the next, the words of one of her students echo on the page: " story might merely be a series of events we believe ourselves to be involved in, but on which we have absolutely no influence at all." (Jan.)

Memories of the futureHustvedt, Siri

This should be written in the present tenseHelle, Helle