How it went down / Kekla Magoon. 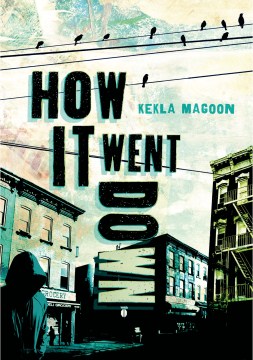 An African American boy runs from the corner market, hunched over and wearing a hoodie. A man shouts, "Come back here!" A car stops in the street, someone yells, "He has a gun!" And suddenly, 16-year-old Tariq Johnson is on the ground, dead from two shots fired at his back. The shooter, a white man, is free after claiming self-defense, but police don't find a weapon on Tariq. Everyone has an opinion about what happened, but the only person who knows for sure no longer has a voice. Seventeen distinct narrators tell this tense, multilayered story, which could easily be headline news. Magoon handles the large cast deftly, letting the players tell their own fragments of the story. Together, they reveal just as much about the last seconds of Tariq's life as they do human nature, racism, and the societal cost of generational poverty. The lack of resolution may frustrate readers seeking answers, but this poignant and honest story is bound to generate a strong emotional response and, hopefully, discussion. Copyright 2014 Booklist Reviews.

A white assailant shoots and kills sixteen-year-old Tariq, who was black, and Magoon tells the story through the many voices of those directly and peripherally involved. Their simple words yield a complicated story. Magoon expertly differentiates the characters by delineating their thoughts, feelings, and motivations; and the accumulation of voices weaving through the narrative effectively makes this believably complex.

"Two guys with guns, one dies -- it's an everyday story." But when sixteen-year-old Tariq Johnson is shot and killed on the street, the event affects the whole community. Tariq was black, his assailant white, and Magoon tells the story through the many voices of those directly and peripherally involved. Their simple words yield a complicated story. Which characters are reliable? Which look to benefit from the situation? Which learn from it and seek a better life? One witness saw "two guys with guns," but even that point is questionable. The "gun" may have just been a Snickers bar. Did the storeowner yell "Stop, thief" or "Stop, T"? Was T hassled by "a white guy" or a "light dude"? The local gang enjoys the notoriety of being in the news. A civil rights activist is seen to be "poaching some limelight off a poor dead black boy" to boost his senatorial campaign; the storeowner sees increased sales when thousands of people turn out to march for Tariq; and the media get a great story of a "gang-related" incident. Magoon expertly differentiates the characters by delineating their thoughts, feelings, and motivations; and the accumulation of voices weaving through the narrative effectively makes this "everyday story" believably complex, going behind newspaper headlines and campaign speeches to portray real people caught up in something bigger than themselves. A powerful novel that will resonate with fans of Myers's Monster (rev. 5/99) and Woodson's Miracle's Boys (rev. 3/00). dean schneide Copyright 2014 Horn Book Magazine.

Structured similarly to Avi's Nothing But the Truth, this provocative novel set in a neighborhood ruled by gangs offers multiple, contradictory perspectives on the shooting of an African-American youth. No one disputes that 16-year-old Tariq Johnson was shot on the street by Jack Franklin, a white gang member, but the motives of both killer and victim remain fuzzy, as do the circumstances surrounding the shooting. The nationally renowned Reverend Alabaster Sloan claims that racial bias was involved and criticizes the police for releasing Jack. Locals have differing opinions, which spur more questions. Was the killing a matter of self-defense? Did Tariq have a weapon? Was he a gang member? Even eyewitnesses disagree on many points. Expressing the thoughts of Tariq's family, neighbors, friends, and enemies, Magoon (37 Things I Love ) creates a montage of impressions for readers to digest before drawing conclusions about the tragedy. Through this resonant chorus of voices, Magoon masterfully captures the cycle of urban violence and the raw emotions of the young people who can't escape its impact. Ages 14–up. Agent: Michelle Humphrey, Martha Kaplan Agency. (Oct.)