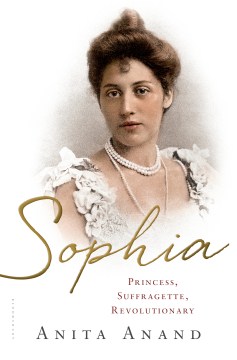 Anand paints a richly textured portrait of Sophia Duleep Singh, one of Great Britain's seminal—yet largely forgotten—suffragettes. Princess-in-exile, daughter of a maharaja, goddaughter to Queen Victoria, Sophia was raised in opulent luxury on a Suffolk estate outfitted to resemble a Mogul palace. A clandestine trip to India in the early twentieth century proved to be a transformative experience for a woman caught between two opposing cultures. Seeking her own unique niche in the worlds she straddled, she committed herself to the female suffrage movement, joining forces with an array of militant suffragettes, including Emmeline Pankhurst and Elizabeth Garret Anderson. Later, as an advocate for the welfare of Indian soldiers in WWI, she redefined herself as a champion of Indian independence. Anand, a journalist by trade, does an excellent job of detailing the social and historical backdrop while highlighting the daring and revolutionary nature of Sophia's choices and accomplishments. Copyright 2014 Booklist Reviews.

BBC radio and television journalist Anand tells the story of Sophia Duleep Singh (1876–1948), born in exile in England but the rightful heiress to a rich and mighty Indian empire—the Kingdom of the Sikhs. Raised as a privileged Englishwoman with Queen Victoria for a godmother, Sophia's life took an unexpected turn when she dared to travel to her ancestral home in India. While there, she found herself moved by the plight of her kinsmen who languished under British rule, and upon her return to England she realized that she could no longer be content with the dog shows and frivolous parties that formerly filled her days. Instead, Sophia embarked on a rebellious journey that would result in her championing the causes of Indian independence, women's rights, and even Indian soldiers fighting for the British crown during World War I. VERDICT Anand writes with a journalist's sense for a solid story and a historian's eye for fascinating anecdotes. Filled with rich detail and walks through little-known avenues of the past, this work is bound to enchant history lovers, those interested in women's studies, Anglophiles, and anyone who enjoys biographies.—Laura Marcus, Odenton, MD

As a ward of the British government born in exile, Indian princess Sophia Duleep Singh embodied a curious mix of East and West—and an equally intriguing combination of patriotism and socially conscious rebelliousness. Journalist and BBC personality Anand writes a sympathetic biography that reads almost like a novel, illustrating how a forbidden trip to India changed the fashion-conscious party devotee into a woman seeking fulfillment in a society that relished her royal status and position as Queen Victoria's goddaughter, but punished her for the color of her skin. While deeply involved in the early 20th-century militant suffrage movement, she also raised funds and helped nurse wounded Indians sent to England to recover during WWI. Anand successfully shows how the inner struggle between her native English culture and her Indian heritage wore on Sophia, resulting in depression and loneliness. Emmeline Pankhurst and a young Winston Churchill make appearances during Sophia's suffrage efforts, but it's Gandhi's evolution that adds depth to Sophia's transformation, humanizing both in the process. One part glittering socialite, one part activist, and entirely unique, Sophia adds a previously unexplored facet to the tumultuous progressive era that remade the Western world. (Jan.)

Lady in waiting: my extraordinary life in the shadow of the CrownGlenconner, Anne

Victoria the queen: an intimate biography of the woman who ruled an empireBaird, Julia (Julia Woodlands)

Young Elizabeth: the making of the queenWilliams, Kate, 1974-

That woman: the life of Wallis Simpson, Duchess of WindsorSebba, Anne

The Queen: the life and times of Elizabeth IIRyan, Catherine

Daughter of empire: my life as a MountbattenHicks, Pamela, 1929-