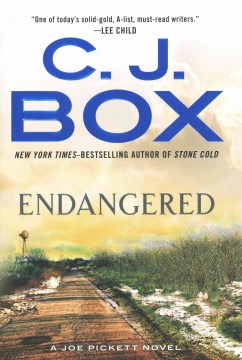 Is there a crime-fiction family as fully fleshed out as Joe Pickett's? In singing the praises of Box's series featuring the Wyoming game warden, we often praise the plotting, pacing, and the down-to-earth hero's friendship with force-of-nature Nate Romanowski. But Pickett's supporting cast—wife Marybeth and daughters Sheridan, Lucy, and April—lends a continuity and grounding to this series that sets it apart from all the lone-wolf stuff out there. And it's the adopted, troubled April who gets the fifteenth Pickett novel off to a troubling start when she's found beaten and unconscious in a ditch. Joe is sure he knows who did it but must reconcile his desire for immediate revenge with the sheriff's insistence on a by-the-book investigation. Meanwhile, the FBI is using Nate as bait to catch his fugitive former employer, and, despite it all, Joe must investigate a politically charged sage-grouse slaughter. As they often do, things get western, with the carefully constructed plot building to a breathless, thrilling end. And Joe's family, battered and bruised, carries on.HIGH-DEMAND BACKSTORY: Box will be touring in person and over satellite radio, backed by the usual promotional blitz in print, electronic, and social media—but his hungry fans will already have this book on hold at the library. Copyright 2014 Booklist Reviews.

In the 15th novel of Box's best-selling series (after Stone Cold) Wyoming game warden Joe Pickett and his family face the fear of losing their 18-year-old adopted daughter, April, who has been badly beaten and abandoned in a ditch. While Marybeth waits at her bedside in a Billings hospital, Joe tracks April's assailant. His chief suspect is rodeo cowboy Dallas Cates, who ran off with April just four months prior. Although another man is arrested, Joe can't ignore the Cates family, led by matriarch Brenda, who, as Joe discovers, will do anything to protect her family, and especially her favorite child. Intertwined in the unfolding drama is the mysterious killing of a flock, or lek, of sage grouse—a species under consideration for listing as endangered; something many Wyomingites, including Governor Rulon, oppose because it would stop or slow energy development in the state. VERDICT Series fans will love this thriller. The nonstop action, intermingling plotlines, and the return of familiar characters all mesh into a breathless, roller-coaster ride of sheer suspense and entertainment. [See Prepub Alert, 9/22/14.]—Patricia Ann Owens, formerly with Illinois Eastern Community Colls., Mt. Carmel

In bestseller Box's solid 15th novel featuring Joe Picket (after 2014's Stone Cold), the Wyoming game warden faces a crime far too close to home. The sheriff tells him that his foster daughter, April, has been beaten and left for dead in a ditch; Joe's reaction to the alarming news is an unequivocal "I'm going to kill Dallas Cates," a dazzling local rodeo champion last seen running off with April. As April lies in a medically induced coma, Joe has to balance his personal crisis with an environmental one: finding the poachers who slaughtered a flock of 21 sage grouse, a species approaching endangered status. Meanwhile, the FBI is tracking the every move of Joe's old friend Nate Romanowski, who went on the run in Stone Cold. Some of the plot devices stretch credulity, and the dialogue isn't as crisp as usual, but the story carries the day. Agent: Ann Rittenberg, Ann Rittenberg Literary Agency. (Mar.)