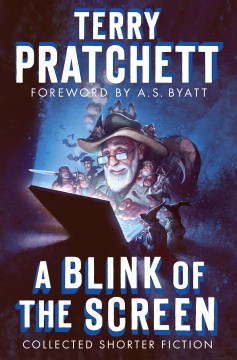 Well, here's a treat: the first collection of short fiction from the creator of the fabulously popular Discworld series. About half the book is given over to Discworld stories, with the other half comprising a fascinating miscellany, including newspaper writings done early in Pratchett's career. The author's very first published short story is here, too, written nearly 55 years ago (he was 13). Also here is the story that sparked Pratchett's collaboration with Stephen Baxter, The Long Earth (2012). In addition, there is is a hysterical "transcript" of a fake political broadcast, a spoof of The Canterbury Tales, a story about a guy who's hired as Hell's public relations director, and a clever tale about Christmas cards come to life. The quality ranges quite considerably, but as a representation of the short-fiction career of one of the fantasy genre's most respected authors, this volume will be much sought after by Pratchett's many devoted fans. Copyright 2014 Booklist Reviews.

Though a third of the stories here are set in Pratchett's blockbuster Discworld universe, this collection ranges over Pratchett's entire career. There's even an introduction from A.S. Byatt comparing Pratchett to British fantasy stars from Tolkien to Rowling.

This collection spans the entirety of Pratchett's prolific career, beginning with the first short story he ever published (when he was just 13), "The Hades Business." Included here are original tales that inspired his "Bromeliad" trilogy and "The Long Earth" series (coauthored with Stephen Baxter) as well as some welcome additions to the "Discworld" canon. Each piece is introduced by the author, giving readers an idea of its where, when, and why. VERDICT With an introduction by A.S. Byatt, this volume provides insight into the extraordinary mind and wit of Pratchett and reveals how he evolved as a writer. An excellent introduction to his work for new readers and the pièce de résistance for longtime fans.[See Prepub Alert, 9/22/14.]—Elisabeth Clark, West Florida P.L., Pensacola

Diehard Pratchett fans will celebrate this first-ever collection of short fiction from the world-famous author of the Discworld novels. These 32 pieces, which show Pratchett "playing with words to see what happens," include his student writing and stories that anticipate his later novels. The author's wry wit shines early on with the publicity-minded devil of "The Hades Business," written at age 13. "Kindly Breathe in Short, Thick Pants," "And Mind the Monoliths," and "There's No Fool like an Old Fool Found in an English Queue" celebrate "half-baked politicians" and bureaucrats. In "The Glastonbury Tale," "Twenty Pence, with Envelope and Seasonal Greetings," and "Once and Future," Pratchett twists classic tales from Chaucer, Dickens, and T.H. White. Discworld characters Cohen the Barbarian, Granny Weatherwax and her fellow witches, the wizards of Unseen University, and Lord Vetinari, ruler of Ankh-Morpork, make appearances in a special section of Discworld-related works. "Short stories cost me blood," Pratchett reminds readers, citing his much greater comfort with novels. Though the stories here aren't his absolute best writing, there is plenty to entertain curious fans. Longtime Pratchett illustrators Josh Kirby and Paul Kidby provide entertaining artwork. (Mar.)

The salmon of doubt: hitchhiking the galaxy one last timeAdams, Douglas, 1952-2001

The wizards of odd: comic tales of fantasyHaining, Peter

The flying sorcerers: a stellar collection from some of the world's most soaring talentsHaining, Peter

A cathedral of myth and bone: storiesHoward, Kat