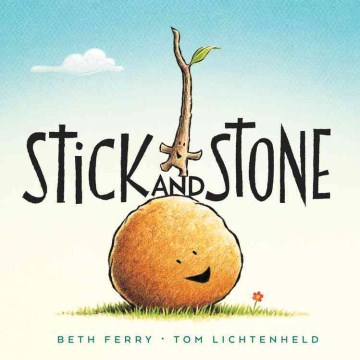 Stick, a stick, is lonely. Stone, a stone, is too. They meet and become friends. The end! In the hands of debut author Ferry and unstoppable best-selling Lichtenheld, however, this nearly plotless affair becomes a thing of off-the-charts adorability. For starters, just look at them: Stone (described as "a zero" because of his shape) is a brown lump, while Stick (described as "a one") is a stubby-limbed fella with a tall twig head topped by a leaf. They both have dots for eyes and dashes for mouths, all of which go giddy after they meet. Ferry uses a minimalism that matches the art: "Stick, Stone. / No longer alone. / Stick, Stone. A friendship has grown." Then: a hurricane! Stick is missing! Then he is saved by Stone! Okay, it's true, even this dynamic author-illustrator duo run out of things to do, but these two characters are a delight to know (at the end, quite cleverly, they form "a perfect 10"), and the irresistible cadence of the text should make this a repeat favorite.HIGH-DEMAND BACKSTORY: After such hits as Steam Train, Dream Train (2013) and Good Night, Good Night, Construction Site (2011), anything Lichtenheld touches will be gobbled up. Copyright 2014 Booklist Reviews.

Stick and Stone meet at the playground--Stone is teased by Pinecone, and Stick, well, sticks up for its new friend. A leisurely paced friendship unfolds until a hurricane blows Stick away, and it's Stone's turn to save the day. Humor, rather than obvious lesson-teaching, moves the story along. Warm pastel illustrations extend the uncomplicated rhyming text; facial expressions are cartoony but effective.

Turning the sticks-and-stones adage on its head, Ferry and Lichtenheld create a story of friendship between Stick and Stone. At book's start, each character is alone, sad-faced and lonely. "A zero. A one. Alone is no fun." (The zero is, of course, the round Stone, and the one is the straight, upright Stick.) The two meet at the playground, and when Stone is teased by Pinecone, Stick, well, sticks up for its new friend. A leisurely paced friendship unfolds, until a hurricane strikes, blowing Stick away, and now it's Stone's turn to save the day. In the end, thanks to Stone's perseverance, the two are reunited as…a "perfect 10." Preschoolers looking for a model of a good friendship need look no further. Kindness rules the day, and humor, rather than obvious lesson-teaching, moves the story along. Pastel illustrations in warm colors extend the uncomplicated rhyming text; facial expressions are cartoony but effective. Making friends has never been easier. robin smit Copyright 2014 Horn Book Magazine.

Newcomer Ferry's simple rhymes and Lichtenheld's (Goodnight, Goodnight Construction Site) pared-down art make fine partners in this testament to friendship. At the outset, reedy Stick stands moodily by the sea, while round Stone gazes at the moon ("Stick. Stone./ Lonely. Alone"). They meet at the playground, where a pinecone makes fun of Stone. Stick defends Stone (" ‘Vanish!' says Stick./ His word does the trick"), and a friendship is born. Ferry adds zip to the best-friends-forever theme with plenty of sly puns ("Stone whispers, ‘Gee,/ you stuck up for me!' "), and Lichtenheld conveys significant expressiveness through the characters' dot eyes and small smiles. More subtly, he darkens objects when the story takes a discouraging turn and pours on the sunlight when things cheer up. Friends can help each other by capitalizing on their differences, he suggests, as when Stone rolls a path through tall grass for Stick as they travel. The use of instantly recognizable objects as characters gives the story universal appeal, and Ferry makes its moral unmissable. Ages 4–8. Author's agent: Elena Giovinazzo, Pippin Properties. Illustrator's agent: Amy Rennert, Amy Rennert Agency. (Apr.)

You are (not) smallKang, Anna