The fishing fleet : husband-hunting in the Raj / Anne de Courcy. 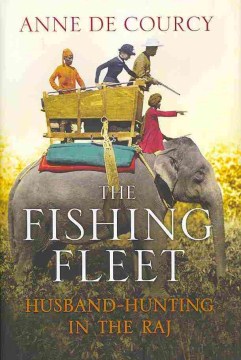 Romance, adventure—and malaria. For the women who traveled to British-ruled India during the late nineteenth and early twentieth centuries, often seeking husbands, the trip could bring more than they bargained for. Commonly referred to as "the Fishing Fleet," these women travelers and their era are brought to life with vivid firsthand accounts of their journeys. Every aspect of their experiences is examined, from the conditions on the boats out and the particulars of courtship to the challenges of housekeeping and isolation that faced a Raj bride. De Courcy can paint a detailed picture and provide context seamlessly, but she wisely takes a backseat to the first-person recollections of the members of the Fishing Fleet, which are both charming and sharply drawn. Using extensive quotations, de Courcy weaves together the highlights of their stories from letters, diaries, and more. The result captures the dichotomy of a culture both adventurous and restrictive, with its glittering social whirl and exhausting battles with heat, humidity, and insect infestations. The only way to get closer would be to join the Fishing Fleet. Copyright 2013 Booklist Reviews.

What's a marriage-minded young Englishwoman to do when so many eligible young men have gone off to India to uphold the British Empire? Follow them, of course. Journalist De Courcy (Snowden: The Biography) provides a fascinating account—not quite gossipy but loaded with juicy anecdotes—of adventurous women sailing for the subcontinent in the 19th and early 20th centuries to fulfill their destinies as wives. Their matrimonial objectives were Englishmen of the Indian Civil Service and officers in the British army, the cream of the Raj crop, whose position and salary made them fine catches. First for the single women came the voyage, with its promise of shipboard romance that could quickly seal the marriage deal. The majority didn't secure husbands that fast, so once the new arrivals settled in with relatives, they paid social calls and attended dinners, parties, and sporting events—all opportunities to meet eligible young men under the watchful eyes of chaperones. Typical of colonial outposts, interracial romance and marriage were banned. Successful fleet members became like Cinderella after the Prince fitted the slipper: married with a home and children to care for; unsuccessful ones, De Courcy notes with subtle irony, went back to England where they were known as "returned empties." Three eight-page b&w photo inserts. (Jan.)

The ruling caste: imperial lives in the Victorian RajGilmour, David, 1952-

The criminal conversation of Mrs. Norton: Victorian England's 'scandal of the century' and the fallen socialite who changed women's lives foreverAtkinson, Diane

The British in India: a social history of the RajGilmour, David, 1952-

Inglorious empire: what the British did to IndiaTharoor, Shashi, 1956-

The world of Downton AbbeyFellowes, Jessica

Indian summer: the secret history of the end of an empireVon Tunzelmann, Alex, 1977-

How to be a Victorian: a dawn-to-dusk guide to Victorian lifeGoodman, Ruth, 1963-