The lady from Zagreb : a Bernie Gunther novel / Philip Kerr. 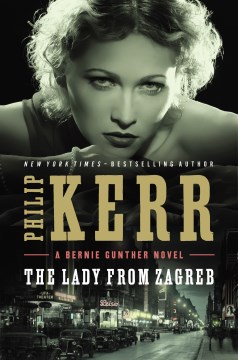 *Starred Review* Kerr faced a crisis a few books ago, after he had taken his cynical German detective Bernie Gunther from the Weimar era through WWII and even into postwar South America. Whither Bernie? Thank heaven for flashbacks. Lately, Kerr has been using Bernie's memory, taking him from his increasingly gray-hued later life back to the war and before. This time Bernie, in 1956, a tired detective at a second-class hotel on the French Riviera, wanders into a cinema and watches a movie starring Dalia Dresner, once the Garbo-like darling of German film and a favorite of movie buff Joseph Goebbels—and, for a brief period, the lover of Bernie Gunther. In the summer of 1942, Bernie was serving reluctantly in the SS, only just barely managing to conceal his hatred of Hitler and the Nazis. Among his more disagreeable taskmasters is Goebbels himself, who gives Bernie a loathsome assignment: track down Dalia's father, a priest, in Croatia and bring him to Berlin for a reunion with his daughter, an event that Goebbels hopes will keep the actress in Germany. So much goes wrong: the father has morphed from priest to Fascist, Bernie and Dalia begin a potentially deadly affair under Goebbels' nose, and a murder in Berlin with ramifications in Switzerland further endangers both the cynical sleuth and the possibly duplicitous film star. Kerr unspools a whopping good historical thriller here, brilliantly evoking not only wartime Berlin, but also Switzerland and Croatia, as well as portraying the German cinema in a time of peril. And, of course, there is the ever-fascinating Bernie, neither as tough nor as cynical as he pretends to be. HIGH-DEMAND BACKSTORY: Bernie Gunther may be the best-loved SS officer in the history of genre fiction (granted, he has little competition), and his fans will be eager to catch up. Copyright 2014 Booklist Reviews.

It's 1943 in Nazi Germany, and former homicide detective Bernie Gunther, now a private eye at the beck and call of Propaganda Minister Joseph Goebbels, must do a favor for Goebbels involving a rising young actress. A Man Without Breath, the last Gunther outing, debuted on the New York Times best sellers list at No. 13.

Kerr sets his tenth Bernie Gunther novel (after A Man Without Breath) in 1942 Zagreb, Croatia, and Zurich, Switzerland. Joseph Goebells, the ambitious and manipulative Nazi propaganda minister, forces Bernie to track down the estranged father of a glamorous German actress, Dalia Dresner (fans of old movies might recall Hedy Lamarr). Bernie finally locates Antun Dragun Djurkovic, who has become a fanatical Croatian fascist and the sadistic commandant of a notorious concentration camp, killing countless Serbs and Jews. While returning to Berlin, our hero is ensnared by American, Swiss, and German intelligence operatives owing to his connections with powerful people in the Reich. VERDICT Although he holds his own among other noted noir authors, such as Jonathan Rabb, David Downing, Alan Furst, and Joseph Kanon, Kerr's magic lies in how he addresses core ethical questions. What is the right conduct while operating within the filthy underbelly of Nazi Germany? How could Kerr's sardonic, tough-talking, anti-Nazi PI survive in a criminal state with his moral integrity and honor intact? Noir devotees, immerse yourselves in the cynical, amoral angst Kerr skillfully portrays. [See Prepub Alert, 11/24/14.]—Jerry P. Miller. Cambridge, MA

Bestseller Kerr's superlative 10th novel featuring former homicide cop Bernie Gunther (after 2013's A Man Without Breath) finds Bernie, now an officer in the SD, at an international police conference in the Berlin suburb of Wannsee in the summer of 1942. Heinrich Heckholz, an attorney, wants Bernie to use his access at Wannsee to gather evidence that a charitable foundation is involved in fraud. Soon after, Heckholz is beaten to death with a bust of Hitler in his office. Almost a year later, with the crime still unsolved, Joseph Goebbels asks Bernie to help movie star Dalia Dresner locate her estranged father. Bernie falls quickly—and hard—for Dalia and agrees to travel on her behalf to Yugoslavia, where he witnesses some horrific scenes. Kerr combines a murder mystery that Raymond Chandler could have devised with a searing look at the inhumanity of the Nazis and their allies, presented from a unique perspective. Agent: Caradoc King, A.P. Watt (U.K.). (Apr.)

Garden of beasts: a novel of Berlin 1936Deaver, Jeffery