The American people. Volume 1, Search for my heart : a novel / Larry Kramer. 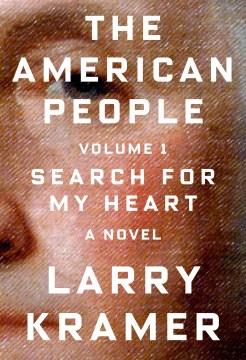 Founder of ACT UP and an award-winning playwright (e.g., The Normal Heart), Kramer offers the first volume of a huge-scale novel that he's been working on for 40 years. This very different look at America wraps the story of a middle-class family near Washington, DC, in a history that proceeds from prehistoric monkeys spreading a strange virus to eugenicists, McCarthyites, and Ivy Leaguers planning to annihilate homosexuals.

Founder of ACT UP and author of Faggots and The Normal Heart, Kramer here reimagines American history in both tragic and ribald registers, queering figures from George Washington to Abraham Lincoln to Ronald Reagan. (See review on p. 82.)

Reviewed by T Fleischmann. It wouldn't be implausible if deep in his publisher's office, Kramer's editors had to form a support group. Which is not to say that this—his sprawling, brazen, problematic, frustrating, incendiary bid at the Great American Novel, re-visioning the U.S. from European colonialism through the 1950s, thrusting toward 800 pages yet only comprising volume one—is entirely misguided. To call it a rough read at times would be an understatement. Of course, Kramer is not known for being easygoing. A founding force behind the revolutionary AIDS activist group ACTUP, finalist for the Pulitzer Prize, and author of Faggots (a novel) and The Normal Heart (a play turned HBO movie), Kramer has made red-faced fist pumping into his art. This latest book has been 30 years in the making, the subject of much anticipation. It straddles the line between history and novel, propelled along by a fictional narrator, Fred Lemish. A clear Kramer stand-in, Lemish is inspired to write his history when President Ruester (this book's Reagan) references "the American People" in a speech and Lemish realizes that gay men aren't included, a fact even more inimical considering that the "Plague of the Underlying Condition" (this book's term for HIV/AIDS) is well underway. The remedy, then, is "to record a history of hate when one is among the hated," which Fleming does.Were this opus merely history, it might not prove so harrying. A straightforward narrative centering on the contributions of gay men and claiming (as Kramer—pardon, as Lemish does) that George Washington, Abraham Lincoln, Alexander Hamilton, Samuel Clemens, Adolf Hitler, and Ronald Reagan were all gay would be easy enough to sort through, the citations lined up and examined. Even the Abraham Lincoln orgy scene might earn a place. But the novel is subtitled Search for My Heart, and so this is a very individualized reckoning with a culture that both made Kramer and killed a good number of the people he loved. Its sections vacillate between rant and narrative, tragedy and ribaldry. People eat mud and invent poppers; the history of medicine is shot through with the history of sexuality; the voice of the Underlying Condition insists in all-bold text that it has been around for centuries; and semen and blood and feces flow like rivers. There are striking insights into the human condition and perplexing digressions (the handling of race is particularly cringe inducing at times, with characters of color rarely transcending stereotypes). It's a story that can be as surprisingly tender as one boy loving another, yet as deeply disturbing as the graphically rendered Nazi-led medical-sexual torture of youth. "You tell your history, and I'll tell mine," Lemish reminds us near the end, as though he needed to. Kramer has been operating at a fever pitch for over three decades now, and it's doubtful that even his most ardent fans don't find him consistently frustrating. There are certainly plenty of occasions to turn away from this long-due effort in anger or distrust (I did, three times). But if you have the stomach for it, Kramer is a singular force, furious because he cares. He honestly confronts hard, unspoken truths and goes somewhere with them, which is a rare thing. One wonders what the hell will happen in volume two. (Apr.)T Fleischmann is the author of Syzygy, Beauty.

Paul takes the form of a mortal girlLawlor, Andrea

The house of impossible beautiesCassara, Joseph