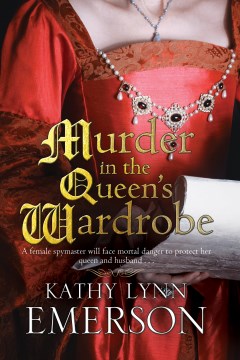 If Rosamund Jaffrey were living today, she might be CEO of a global company. Since she lived in the sixteenth century, however, she is relegated to serving as an agent for Queen Elizabeth I's spymaster, Francis Walsingham. Her mission: to protect Lady Mary Hastings, who's being offered to Russia's Czar Ivan in the hopes of forging a political alliance between Russia and England. Behind the scenes, there are factions in the queen's court who want their own candidate to marry the czar and who pose a threat to the vulnerable Lady Mary. The carrot to get Rosamund to take on the risky mission? Her husband is in Russia and may be in terrible danger, especially if the alliance between the two countries doesn't happen. But even someone as tough as Rosamund faces terrible danger from those at court who see her as an impediment who should be eliminated. First-rate storytelling, eye-opening details of the politics and customs of the time, a taut and riveting plot, unexpected humor, and a charming and admirable heroine make this a fine choice for historical-mystery fans. Copyright 2014 Booklist Reviews.

This new series by Emerson is a spin-off of her "Face Down" Elizabethan mysteries featuring Susanna, Lady Appleton. Rosamond Jaffrey was raised by Lady Appleton, even though she was the illegitimate daughter of Lady Appleton's late husband. In order to avoid an arranged marriage, Rosamond married a childhood friend, Rob Jaffrey, who lived on the Appleton estate. Now she has control of her own fortune and is enjoying life on her own terms when she is asked by a family friend to pose as a lady-in-waiting for Lady Mary Hastings, a cousin of Queen Elizabeth I, in order to gather information for Sir Francis Walsingham, the queen's spymaster. When Rosamond's contact is murdered and Lady Mary is injured, Rosamond uses all her skills to unmask the person behind the plot. At the same time, Rob is in Russia on business but has been arrested. VERDICT This novel is as much a spy thriller as a historical mystery. The author's detailed knowledge of the time period is evident as she interweaves historical figures with her fictional characters. An exciting final twist ties the two story lines together. Rosamond is a feisty, fiercely independent, and very likable protagonist. Recommended for fans of Emerson's previous series as well as for readers of Fiona Buckley, Karen Harper, and Amanda Carmack.—Jean King, West Hempstead P.L., NY

Fans of Emerson's historical mysteries will be intrigued by the debut of grown-up Mistress Rosamond Jaffrey as "intelligence gatherer" in this first in a new Tudor series. Negotiations for an English princess to marry Russia's Ivan the Terrible ensnare Rosamond and several other characters from the author's Face Down series. High-spirited, educated, and independent, Rosamond is apparently ill suited to the position of gentlewoman to Lady Mary Hastings, cousin to Queen Elizabeth, a role Rosamond reluctantly accepts in order to protect her estranged husband, who has accompanied an English trading company to Russia. Planted in Lady Mary's household to report conversations in Russian, Rosamond struggles first with boredom, then with growing concern as a death and subsequent attacks on members of the household lure her to investigate who and why someone would want to commit murder. Emerson draws on her solid knowledge of the period to evoke vividly daily life in late 16th-century England. Agent: Christina Hogrebe, Jane Rotrosen Agency. (Mar.)

To shield the queen: a mystery at Queen Elizabeth I's courtBuckley, Fiona

A murder by any name: an Elizabethan spy mysteryWolfe, Suzanne M.

A prisoner in MaltaDepoy, Phillip

The Tudor secret: the Elizabeth I spymaster chroniclesGortner, C. W.