Six and a half deadly sins / Colin Cotterill. 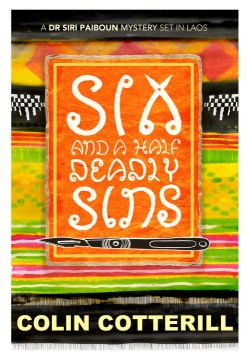 Sin here is a play on pha sin, a hand-woven, traditional skirt worn in Laos. Sins figure prominently in this mystery set in 1979, starring the retired National Coroner of Laos, Dr. Siri Paiboun, who receives an unmarked package containing a pha sin. Paiboun examines it and finds that the hem hides a severed human finger. He is intrigued by this covert message, which comes at a time when he is terminally bored with retirement. It's fascinating to watch the ex-coroner work against the repressive regime by using all his considerable savvy and old contacts to figure out the origin of this finger. Dr. Siri and his nearly crippled wife embark on a strenuous journey to a remote province in the north. By chance, the cop husband of Siri's former assistant in the morgue is there, investigating the murders of two village headmen. Both investigations link into a disturbing conspiracy, played out against the backdrop of impending war. Dr. Siri's iconoclastic spirit and caustic wit are a delight to witness in this, the tenth in the series. Recommend to followers of Timothy Hallinan's Bangkok-set Poke Rafferty series. Copyright 2014 Booklist Reviews.

Cotterill's tenth entry (after The Woman Who Wouldn't Die) in his quirky and always fascinating series opens with the elderly Dr. Siri Paiboun, the former national coroner for Laos, eating lunch with his old friend, Comrade Civilai Songsawat. It is 1978, and Siri has received an unmarked package containing a traditional Laotian pha sin, a skirt woven in a particular pattern, with a finger stitched to the lining. He goes north to the province where the garment was made to investigate. His entourage includes his wife, Daeng, as well as Civilai, and Ugly, the dog. They are given more weavings, each providing extra clues and leading the group on a scavenger hunt of sorts. Murders, drugs, mysticism, thefts, and misdirection soon follow. VERDICT Besides presenting an intriguing mystery set in an unfamiliar culture, Cotterill compellingly portrays an ancient country in the midst of great transition. Readers who enjoy the Asian mysteries of Eliot Pattinson, Tim Hallinan, and John Burdett will also savor this title.

"On December 25, 1978, the concrete public-address system pole in South That Luang's Area Six unexpectedly blew itself up, a Lao skirt with a severed finger sewn into the hem passed through the national postal system unchallenged, and Vietnam invaded Cambodia." This opening sets the tone perfectly for Cotterill's 10th mystery featuring retired Laos national coroner Siri Paboun (after 2013's The Woman Who Wouldn't Die). Siri discovers the finger, and he's determined to learn how it ended up in the garment. His canny wife, Madame Daeng, helps him identify the skirt's likely place of origin, an area in the north run by drug-dealing warlords. To short-circuit the bureaucratic process of getting approval to travel there, Siri must exonerate the head of Public Prosecution from charges of sexual assault. His inquiry coincides with a sensitive murder investigation that may implicate Chinese nationals at a time when the country is on edge because of the Vietnamese invasion. Cotterill neatly combines humor, detection, and politics. (May)

The Golem of HollywoodKellerman, Jonathan

Though the heavens fallEmery, Anne