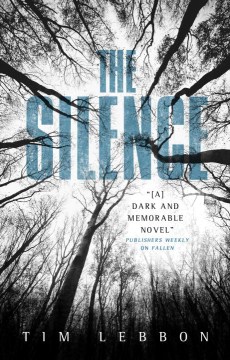 *Starred Review* Here's a brilliantly constructed, intensely dramatic horror story from the author of Dusk (2007) and Coldbrook (2014). In Moldava, a group of explorers accidentally unleash a species of creature that had been penned up in an underground ecosystem for millennia. These blind creatures with creepy yellow skin hunt by sound; they will eat any living thing; and as they spread out across Europe, multiplying with frightening speed, they cause the fall of cities, with chaos reigning in their wake. One family flees their home, striking out for a quiet rural area where, perhaps, they can hide from the ravenous creatures. Other families are trying the same thing, but one has a secret weapon: a teenager, Ally, who has been deaf for nearly a decade and who can, she hopes, teach her parents, brother, and grandmother to live without making a sound. Told in alternating points of view, switching back and forth between Ally and her father, the story is terrifying and almost painfully claustrophobic in places, with compelling characters (watch out for the reverend!), and really, really scary monsters. Genius at work here. Copyright 2017 Booklist Reviews.

Watching a nature program, deaf teen Ally is horrified when spelunkers exploring a deep cave system in Moldova are suddenly attacked by flying creatures that kill everyone in the area. Faster than anyone thought possible, the beings, dubbed "vesps," spread across Europe and even make it to its Western edge, Britain. Vesps are attracted to sound, so Ally and her family pack their car intending to reach a remote area of Scotland, but the road is full of perils. VERDICT Creature-feature horror is a staple of the genre for good reason. Lebbon's (Coldbrook) latest hits all the notes you would expect as the family pulls together, faces a rolling parade of crises, sees the worst of their fellow man, and, of course, fights creepy, vicious monsters. Ally's disability means that her family is better prepared than most for a world in which any sound can bring flying death upon you.

Stoker and Derleth winner Lebbon (Coldbrook) delivers a chilling and heart-wrenching story that transcends its "yet another global apocalypse" trappings. This time the danger in the not-too-distant future (2016) is from "vesps." These carnivorous flying creatures have been released from a long-sealed underground cave system in central Europe, where they evolved to rely on their hearing to find meat. As the vesps speed towards the U.K., Ally, a Deaf teenager, and her family attempt to escape to a quieter part of England. Ally and her father, Huw, struggle to deal with the unleashed monsters as well as the inevitable horrors committed by other humans in desperate times. Although Lebbon delivers graphic violence and gore, it's the sense of despair that really creates the terror, as reports from the internet dwindle and the family watches people and animals die. The sacrifices made for survival are brutal, leading to a horrific and intense climax. (Apr.)