The woman who walked in sunshine / Alexander McCall Smith. 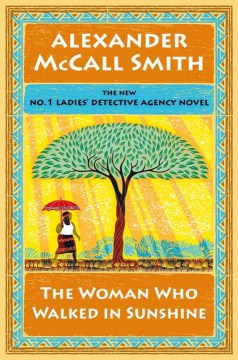 *Starred Review* The sixteenth installment of the internationally best-selling No. 1 Ladies' Detective Agency series again showcases the boundless compassion, humor, and occasional wiliness of the agency's founder, the "traditionally built" Mma Precious Ramotswe. The agency, located under an acacia tree in Gaborone, Botswana, and sharing premises with the Tlokweng Road Speedy Motors, now accommodates (besides Mma Ramotswe) Charlie, a failed Speedy Motors mechanic taken on out of charity, and a great comic character, the often-exasperating Mma Makutsi, who, after a great deal of maneuvering, is now co-director. This episode begins with Mma Makutsi campaigning for Mma Ramotswe to take a holiday. Is Makutsi only wanting Precious to have a break, or is something else behind the suggestion? Precious agrees but can only do nothing for about half a day before she feels she has to know, even secondhand, what's going on in her absence. Makutsi has given a volunteer worker an exceptionally delicate case, involving a famous Botswanan politician whose past may come back to bite him like a mamba. Secrets and consequences abound, and Precious has to navigate at a remove. The title comes from Precious' reflection that she, blessed by the love of her husband, the proprietor of Tlokweng Road Speedy Motors, walks in sunshine. Readers of this and the whole series will feel similarly blessed. Copyright 2014 Booklist Reviews.

Even as Mma Ramotswe prepares for a much-deserved vacation, the No. 1 Ladies' Detective Agency opens its doors to a young woman upset that her father's reputation as a hero of Botswana is being challenged, and Mma Makutsi insists that she and Charley can handle the case—never mind that Charley's obsessed with his spunky new dog. This 16th in the New York Times best-selling series will get a boost from a ten-city tour here.

Precious Ramotswe goes on vacation in Smith's enchanting 16th No. 1 Ladies' Detective Agency novel (after 2014's The Handsome Man's De Luxe Café). Her second in command, the prickly Grace Makutsi, is glad to take charge in her absence. Mma Ramotswe, who's basically staying home on Zebra Drive in Gaborone, can't help worrying about how things are going at the office. Her concern grows when Mr. Polopetsi, a part-time chemistry teacher who also helps out at the agency, confides that Mma Makutsi has failed to make progress on a new case involving a late government official. With Mr. Polopetsi's blessing, Mma Ramotswe discreetly investigates. Meanwhile, she comes to the assistance of Samuel, an abused boy she encounters on the street, and discovers that scheming Violet Sephotho, Mma Makutsi's rival from the Botswana Secretarial College, has started the No. 1 Ladies' College of Secretarial and Business Studies. As usual, Smith's blend of gentle humor and insights into human nature is irresistible. Agent: Robin Straus, Robin Straus Agency. (Oct.)