It's a long story : my life / Willie Nelson with David Ritz. 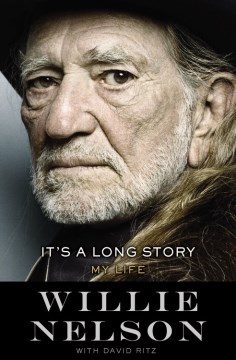 It's been more than a quarter century since Nelson's first autobiography, Willie (1988), and a lot has happened since then. His highly publicized problems with the IRS, for example—the IRS claiming, in the 1990s, that he owed more than $30 million—and his spectacular subsequent career resurgence. Nelson could have approached this new book as part 2 of his life story, picking up where the earlier book left off, but instead he takes readers back to the beginning, which means that portions of the book may be repetitive to those familiar with the earlier volume; but new fans will appreciate the backstory. On its own terms, it's an engaging, often surprising, occasionally heartrending story of a kid from Texas who became a songwriter, then a performer, then a cultural icon—but an icon who saw his life torn apart and, then, piece by piece, was able to rebuild it nearly from scratch. Nelson's fans will be standing in line for this one, even if they read the earlier volume back in the day. Copyright 2014 Booklist Reviews.

Musician Nelson collaborates with prolific author Ritz (Divided Soul; Respect) to present his memoir in a conversational style. He succeeds in giving us a true picture of himself, warts and all, by relating the wild side of his nature and his tendency to womanize. A natural songwriter and poet from Abbott, TX, born in 1933, he was heavily influenced by Western swing music and the music of Ernest Tubb, Jimmie Rodgers, Hank Williams, and Django Reinhardt. His favorite singer was Frank Sinatra. Stories range from skipping town by jumping aboard freight trains, selling encyclopedias to make ends meet, and getting stoned on the roof of the White House during the Jimmy Carter years. He made great efforts to organize Farm Aid in the mid-1980s. Nelson also performed with numerous musicians including Kris Kristofferson, Leon Russell, Waylon Jennings, and Bob Dylan. He is best known for crafting the songs "Crazy," made famous by Patsy Cline, and "On the Road Again." VERDICT This book will appeal to die-hard Nelson fans who are willing to plod through text that's laced with profanity. [See Prepub Alert 11/10/14.]—Elizabeth D. Eisen, Appleton P.L., WI

Picking up where he left off in 2012's Roll me Up and Smoke Me When I Die, Nelson shares intimate and entertaining details of his life behind the guitar, the ups and downs of his marriages, his infamous encounter with the IRS, and his deep love of making music. Nelson, a scrappy youngster whose schoolmates nicknamed him Booger Red, was raised by his grandparents and found music everywhere he went, from the songs of field workers picking cotton or baling hay to the sounds of his blacksmith grandfather's anvil. By the time Nelson was eight, he was writing songs and playing guitar, and his decision to be a wandering singer like his hero, Ernest Tubb, was set. Nelson spent his early years as a disc jockey, getting to know the music industry from outside the studio and learning about all styles of music. He shares stories of his close friendships with Ray Price, who advises Nelson to be prudent with his money; Waylon Jennings; and Leon Russell, who helps Nelson put together his Woodstock-style Fourth of July picnic on Nelson's ranch. Nelson offers a warm, friendly, and a deeply reflective glimpse behind the making of most of his albums as well as behind-the-scenes looks at some of his best-known hits, such as "Crazy" and "Yesterday's Wine." Reading Nelson's narrative is like sitting on the front porch chatting with an old friend. (May)