The precipice : a novel / Paul Doiron. 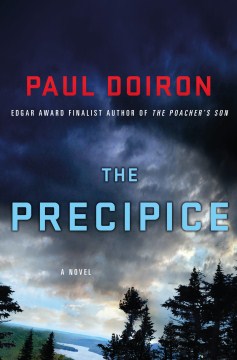 *Starred Review* Many of our favorite nonconformist crime-series heroes leave their jobs in righteous indignation but eventually return to the fold. It was so for Michael Connelly's police detective Harry Bosch and for C. J. Box's game warden Joe Pickett, and so it is for Doiron's Mike Bowditch, also a game warden, whose last adventure, The Bone Orchard (2014), found the inveterate rule-breaker out on his own, working as a fishing guide but still landing up to his waders in a murder investigation. He's back with the Maine Warden Service this time, but he hasn't stopped pushing the bureaucrats' buttons, and there are plenty of buttons to push after the bodies of two female hikers are found ravaged by coyotes in Maine's Hundred-Mile Wilderness. Bowditch and his equally volatile girlfriend, Stacy Stevens, don't believe the coyotes killed the women, though the animals did scavenge the bodies, and when Stevens herself disappears, Bowditch kicks into overdrive, leaving various politicians and state officials fuming in his wake. Doiron, like Keith McCafferty in Crazy Mountain Kiss (2015), manages to write evocatively about the wilderness while at the same time showing how it can be a deadly adversary. Not that humans aren't even more deadly, as Bowditch discovers when he's forced to go up against the drug-dealing Dow family, who terrorize the surrounding community much in the manner of the Ames clan in Jim Harrison's The Big Seven (2015). This is one of the finest entries in a uniformly strong series that has quietly taken its place among the very best outdoors-based crime dramas.HIGH-DEMAND BACKSTORY: An extra marketing boost may well vault Doiron to the next level in sales; he's already there in critical acclaim. Copyright 2014 Booklist Reviews.

The bodies of two young female hikers are found chawed clean by coyotes along the Appalachian Trail, and game warden Mike Bowditch's biologist girlfriend insists that as scavengers coyotes could not have killed them. Sixth in a series from Barry Award winner Doiron.

In this sixth series outing (after The Bone Orchard), Doiron continues to develop steadily the universe of Maine game warden Mike Bowditch. When the chewed-up bodies of two young female hikers who disappeared along a remote stretch of the Appalachian Trail are found, biologist Stacey Stevens, Mike's new girlfriend, insists coyotes were not the culprits. When she disappears along the trail where the girls had vanished, Mike must uncover the truth. VERDICT Bowditch is an uncomplicated good guy who might even be considered boring except for the lively conversations on topics as diverse as atheism, sexuality, and animal rights. This unexpected thoughtfulness makes his character appealing enough for readers to cheer him on. Doiron offers backstory for new readers, while fans of outdoorsy mysteries and Daniel Woodrell will enjoy seeing another aspect of backwoods law and order. [See Prepub Alert, 12/15/14.]—Nicole R. Steeves, Chicago P.L.

Doiron brings his gift for making the Maine woods live and breathe to a taut whodunit in his stellar sixth novel featuring game warden Mike Bowditch (after 2014's The Bone Orchard). Bowditch is pulled away from a romantic weekend with his biologist girlfriend, Stacey Stevens, when word reaches the authorities that two young women have disappeared while hiking the Appalachian Trail's daunting Hundred Mile Wilderness. Samantha Boggs and Missy Montgomery, recent graduates of Pentecost University, a Christian school in the South, failed to check in with their parents in Georgia three days earlier, triggering a massive manhunt. Bowditch is teamed with an unusual volunteer, Bob Nissen (known as Nonstop for his record pace hiking the entire trail), and is soon able to narrow the parameters of the search. Bowditch identifies the women's "point last seen" via a logbook entry that contains an ominous reference to coyotes. Multidimensional characters and a high level of suspense help make this a winner. Agent: Ann Rittenberg, Ann Rittenberg Literary Agency. (June)