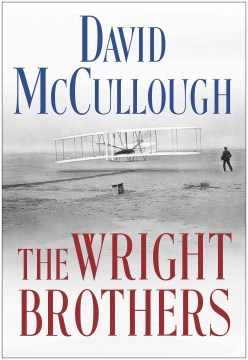 *Starred Review* Fairly or not, Orville and Wilbur Wright will always be best remembered by the general public for December 17, 1903, the day at Kill Devil Hills, North Carolina, when the brothers flew, for the first time, a heavier-than-air vehicle. Of course, the brothers had accomplishments and interesting lives that both preceded and followed that triumphant day, as this fine biography by esteemed historian McCullough shows. McCullough offers an interesting portrait of their youth in Dayton, Ohio, that also serves as an examination of daily life in post–Civil War Middle America. Neither boy had a formal education beyond high school, although Wilbur's plan to attend Yale was thwarted by an injury. Yet both displayed keen intelligence and strong interest in various mechanical devices. That interest led to their ownership of both print and bicycle shops, but their interest in the possibility of human flight soon became an obsession for them. McCullough illustrates their creative geniuses as well as their physical courage leading up to the initial flight. He also pays tribute to an unsung hero, their sister Katherine, who played a prominent role in their achievements. This is an outstanding saga of the lives of two men who left such a giant footprint on our modern age.High-Demand Backstory: This author's countless previous bestsellers demand that public libraries have his latest book in their shelves. Copyright 2014 Booklist Reviews.

McCullough (John Adams; 1776) effectively blends impeccable writing with historical rigor and strong character definition in his biography of Wright brothers Wilbur, the abstract thinker and introvert; and Orville, the extrovert and hands-on doer. They had limited formal education, with the author instead attributing his subjects' success to industry, imagination, and persistence, as seen in their early enterprises as newspaper publishers, printers, and bicycle salesmen in Dayton, OH. Credit is also accorded to their widowed father, Bishop Milton Wright, as well as their sister Katharine for their support of "Ullam" (Wilbur) and "Bubs" (Orville). Highlights of McCullough's narrative include his discussions of the Wrights' innovative conception of wing-warping as a means of flight control; the brothers' first controlled, powered, and sustained heavier-than-air human flight at Kitty Hawk, NC, on December 17, 1903; the issuance of the Wright flying machine patent #821,393 on May 22, 1906; the Ohioans' ongoing search for markets abroad; and the elder Wright's perfect flying demonstrations at Le Mans, France, even as Orville was nearly killed in a similar performance before army brass at Fort Myer, VA. The author closes with the incorporation of the Wright Company, patent infringement suits filed against competitor Glenn Curtiss, and the deaths of Wilbur (1912), Milton (1917), Katharine (1929), and Orville (1948). VERDICT A signal contribution to Wright historiography. Highly recommended for academicians interested in the history of flight, transportation, or turn-of-the-century America; general readers; and all libraries.—John Carver Edwards, formerly with Univ. of Georgia Libs.

Of course McCullough, two-time winner of both the Pulitzer Prize and the National Book Award, will do a smash-up job with the inspiring story of the Wright Brothers, drawing from diaries, notebooks, scrapbooks, and more than 1,000 letters from private family correspondence to highlight the men behind the myth while underlining the contributions of their sister, Katherine.

Mechanical invention is close to a religious calling in this reverent biography of the pioneers of heavier-than-air flight. Pulitzer-winning historian McCullough (Truman) sees something exalted in the two bicycle mechanics and lifelong bachelors who lived with their sister and clergyman father in Dayton, Ohio. He finds them—especially Wilbur, the elder brother—to be cultured men with a steady drive and quiet charisma, not mere eccentrics. McCullough follows their monkish devotion to the goal of human flight, recounting their painstaking experiments in a homemade wind tunnel, their countless wrong turns and wrecked models, and their long stints roughing it on the desolate, buggy shore at Kitty Hawk, N.C. Thanks largely to their own caginess, the brothers endured years of doubt and ridicule while they improved their flyer. McCullough also describes the fame and adulation that the brothers received after public demonstrations in France and Washington, D.C., in 1908 cemented their claims. His evident admiration for the Wrights leads him to soft-pedal their crasser side, like their epic patent lawsuits, which stymied American aviation for years. Still, McCullough's usual warm, evocative prose makes for an absorbing narrative; he conveys both the drama of the birth of flight and the homespun genius of America's golden age of innovation. Photos. Agent: Mort Janklow, Janklow & Nesbit. (May)

The chasing Icarus: the seventeen days in 1910 that forever changed American aviationMortimer, Gavin

The flyers: in search of Wilbur and Orville WrightAdams, Noah

Birdmen: the Wright brothers, Glenn Curtiss, and the battle to control the skiesGoldstone, Lawrence, 1947-

To conquer the air: the Wright brothers and the great race for flightTobin, James, 1956-

Empires of the sky: zeppelins, airplanes, and two men's epic duel to rule the worldRose, Alexander, 1971-

First flight: the Wright brothers and the invention of the airplaneHeppenheimer, T. A., 1947-

Unlocking the sky: Glenn Hammond Curtiss and the race to invent the airplaneShulman, Seth