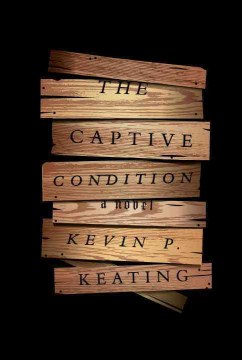 People in the know are talking about this new work from Keating, a former steel mill's boilermaker who became an English professor and literary journal regular until his small press first novel, The Natural Order of Things, was named a finalist for the Los Angeles Times Book Prize Art Seidenbaum Award for First Fiction in 2012. In this second novel, a married college professor guiltily assumes responsibility for the twin daughters of his drowned lover even as a petty criminal takes over a recluse's cottage with plans for its moonshine still and graveyard and the town itself gets uncontrollably creepy after sundown. Classed as literary, but the book will be featured at a thriller/horror panel at the 2015 San Diego Comic Con, with outreach to mystery and horror bloggers in the works.

A Catholic school preppy enrolls in a seemingly idyllic Midwestern university that is anything but. Academic troubles doom him; his pompous and prolix mentor snubs him; and he comes to work for a medium-level criminal known as the Gonk, at the power plant, aka the Bloated Tick. Then, the mentor's mistress drowns drug-addled in her pool, her creepily prescient twins come to live with the mentor, trash his house and then freeze to death in a barn, after which their ghosts doom their seaman father to freezing. Then the Gonk takes revenge on his ex and her new love, who becomes the first of two in this book to be buried alive. The preppy takes revenge on the mentor, but only after all the other Tick workers die at sea. Oh, and many characters here are constantly high on psychedelic carrot juice. You get the idea. Many complicated plots weave and intertwine in a weird and wonderfully rendered universe. Also, there's heavily cadenced prose and A-level vocabulary, along the lines of Tristan Egolf's Lord of the Barnyard. VERDICT Not an academic send-up à la Richard Russo or Jon Hassler but a highly literary look at the faces of evil in almost all of its guises. [See Prepub Alert, 1/25/14.]—Robert E. Brown, Oswego, NY

Keating's sophomore novel (after The Natural Order of Things) is a black comedy that transcends its own offbeat energy and becomes truly disturbing. Jesuit-educated Edmund Campion is attending graduate school in the small Midwestern town of Normandy Falls. When his master's thesis topic is rejected by his self-important advisor, Dr. Kingsley, Edmund drops out and takes a job as a campus groundskeeper, working for a brutal supervisor known only as the Gonk. Meanwhile, Kingsley's lover, Emily Ryan, is found dead in her swimming pool, and Kingsley and his amateur bodybuilder wife end up taking in Emily's disturbed twin daughters. Morgan Fey, Edmund's ex-girlfriend, takes a job in a French restaurant, where the chef brews up the hallucinogenic carrot juice that is the town's drug of choice. This is only the beginning: hauntings, murders, live burials, and imprisonment in underground chambers are just some of the fates that lie in store for various unsuspecting townsfolk. The comically formal tone of the first two-thirds shows Keating to be an astute student of spooky scene-setters from Edgar Allen Poe to Stephen King to David Lynch. But in many of the final passages, such as a horrific building fire, he proves to be at least their equal. It's a mysterious novel, both in terms of its plot and its ambitions—the book's biggest missed opportunity is that its world feels a bit too hermetic and detached from our own—but it's also a darkly funny read and a stylistic tour de force. (July)

Lord of the barnyard: killing the fatted calf and arming the aware in the Corn BeltEgolf, Tristan, 1971-

All things cease to appearBrundage, Elizabeth