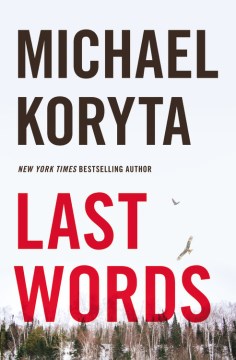 Koryta's remarkable ability to imbue nature with supernatural hostilities is unnervingly visible in this well-plotted cold-case thriller featuring a cast of aptly bizarre, inscrutable characters. Innocence, Incorporated, investigator Mark Novak is dispatched to Garrison, Indiana, when Ridley Barnes asks the company, which specializes in exoneration, to help him determine whether he murdered Sarah Martin. The popular teenager died while held captive deep underground in the mostly unexplored Trapdoor Caverns. Although no evidence was found to warrant Barnes' arrest, the townspeople grew convinced of the expert spelunker's guilt after he claimed he couldn't remember where he found Sarah's body and insisted that the cave communicated with him as if it were alive. Novak's own hostile encounter with Barnes convinces him that Barnes is a killer toying with the police. Then a humiliating news report spotlights a glaring mistake in Novak's investigation and changes everything. Another tense thriller from the consistently entertaining Koryta. Copyright 2014 Booklist Reviews.

Accused of killing the teenage girl whose body he's rescued from southern Indiana's dangerous cave system, a man seeks the help of private investigator Mark Novak, who plunges into the town's secrets—and the caves themselves, where someone who knows their every twist and turn awaits. With a 75,000-copy first printing.

Still mourning his wife's violent and unsolved murder two years ago, Mark Novak is an investigator for a group that helps wrongly convicted death row inmates. He's sent to the small town of Garrison, IN, because his firm received a letter from Ridley Barnes asking for help. Ridley hasn't been convicted and is not on death row, but he is suspected of killing a teenager in the Trapdoor Caverns a decade ago. Unable to remember the events that led him to carrying out the dead girl's body, Ridley wants to know what really happened, even if it means him going to jail. But Mark soon realizes he has been lied to and set up to look like a fool. After more entanglements, including a near-death experience in the cave where the girl died, Mark is determined to uncover the truth. VERDICT With each book, the talents of New York Times best-selling author Koryta (The Prophet) just get better. His latest is sure to please his readers and fans of John Connolly. [See Prepub Alert, 3/2/15.]—Jason L. Steagall, Gateway Technical Coll., Elkhorn Lib., WI

This moving series launch from bestseller Koryta (Those Who Wish Me Dead) illustrates why he's among today's top thriller writers. PI Mark Novak has not done well since his wife, Lauren, was murdered on her way to an interview on behalf of the Florida firm that specializes in exonerating death-row inmates for which the couple worked. Two years later, Mark, who's at risk of being fired by that firm, receives an unusual request. Ridley Barnes, an eccentric cave explorer, wants him to look into the decade-old murder of 17-year-old Sarah Martin, who disappeared inside Trapdoor Caverns in Garrison, Ind. Barnes was a prime suspect in that case, though he was never charged. The tragedy plunged the town into an economic depression after the cave's owners sealed it, cutting off the tourist trade. In Garrison, Mark encounters people who refuse to talk—and violence. Koryta sensitively portrays regret and grief while plunging the reader into exciting, claustrophobic scenes deep inside the massive cave. Author tour. Agent: David Hale Smith, Inkwell Management. (Aug.)

No place to dieDonoghue, Clare