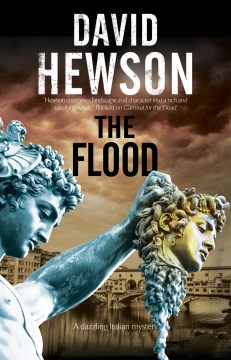 Hewson, author of the riveting Nic Costa series, set in Rome, returns to Italy—Florence this time—and to one of his favorite themes: the mixture of the sacred and the profane in the great works of the Italian Renaissance. Julia Wellbeloved is an English art student in Florence to work on a paper about what leads deranged individuals to defame works of art. Such a defamation has occurred in Florence's Brancacci Chapel, and its aftermath brings Julia together with Pino Fratelli, a police detective on medical leave who desperately wants back in the game. It's 1986, 20 years after the great Florence flood, and the reverberations from that disaster continue to be felt by the city's residents. Julia soaks knowledge from Fratelli about Florentine art and crime, while he uses his friendship with the student to work the edges of this latest incident, which he sees correctly as the beginning of something much bigger and more deadly. Alternating between the points of view of Julia, Fratelli, and a seemingly crazed serial killer, Hewson spins an engrossing tale of art and murder. Pair this with Robert Hellenga's The Sixteen Pleasures (1994), also about the aftermath of the flood. Copyright 2014 Booklist Reviews.

Author of more than 25 books, including the Rome-based "Nic Costa" series, former British journalist Hewson introduces Pino Fratelli of the Florentine Carabinieri and English grad student Julia Wellbeloved. Pino, on permanent sick leave with an incurable brain tumor, attributes his illness to the unsolved rape and murder of his wife during the great flood that ravaged Florence in 1966. Two decades later Julia has come to the Italian city to work on her dissertation, a study of why violence is committed against works of art. She and Pino are thrust together following an act of vandalism that damages the figure of Eve in the Brancacci Chapel frescoes. Complicating matters is the murder of one of Florence's gay aristocrats, a man involved with an ancient secret society, La Brigata Spendereccia, in which 12 men gather for a monthly bacchanal that often results in rape. Has a new Savonarola risen to purify a corrupt city with his own Bonfire of the Vanities? VERDICT Hewson excellently integrates episodes from Florentine history into the lives of his intriguing heroes, who struggle against tremendous odds to solve mysteries old and new. Readers of Donna Leon and Michael Dibdin or Italian authors Andrea Camilleri and Carlo Lucarelli will find this gripping.—Ron Terpening, Univ. of Arizona, Tucson

Distinctive characters compensate for the at times slow-moving plot of Hewson's atmospheric Italian mystery, set mainly in Florence in 1986. Pino Fratelli, a semiretired carabineer, meets British graduate student Julia Wellbeloved, who's studying the connection between violence and art, at a Florentine chapel, where a fresco of Adam and Eve has been defaced with blood. The culprit is Aldo Pontecorvo, who's involved with a gunrunner for the Red Brigade. Hewson (Carnival for the Dead) doesn't generate much suspense with the crime-solving efforts, even after the decapitation murder of an aristocrat. Nicely rendered chapters set 20 years earlier, during the historical flood of the title provide some colorful, though not strictly necessary, background. The book's greatest strength is the engaging relationship that develops among Pino, Julia, and 22-year-old Luca Cassini, the not-so-bright carabineer assigned to help them. Readers who want to see more of this trio can only hope that their next case will be more intriguing. (Oct.)

The light in the ruinsBohjalian, Chris, 1960-