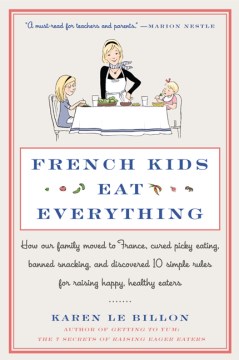 Pity the American parent who tries to get the kids just to taste an unfamiliar food. The resulting tantrum usually suffices to bar the offending flavor from any future meal till well past the offspring's puberty. Having lived in France and observed children there who readily consume all manner of comestibles, Le Billon perceives Americans as too timid and unstructured in their child-raising practices. From her own experiences and from talking to French parents, she has formulated 10 rules that she believes can turn just about any American child into a happy, healthy omnivore. These rules begin with establishing parental control—it's the adult who's in charge here. A corollary rule holds that meals are social events for families, with television and texting strictly taboo. Eliminating snacking, Le Billon believes, can help to stave off today's plague of childhood obesity. Will American kids soon be ordering birthday dinners of escargots? Copyright 2012 Booklist Reviews.

More than 50 years ago, families ate meals together at the table on a regular schedule, children weren't served separate meals, and snacking between meals wasn't rampant. When food advocate Le Billon (environment & sustainability, Univ. of British Columbia) moved her half-Canadian, half-French family to France, she was surprised to find out that this is how the French still live. Quickly acknowledging that her child-centered method of parenting has spawned two picky eaters, she embarked on a yearlong food experiment to analyze the French culture of parenting and food and devised ten French "food rules." In her view, French parents are stricter, more demanding, and less indulgent than North American parents and, as a result, she concludes, French children have more self-control at the table and eat what is served to them. After a year of food-related misunderstandings, arguments, gaffes, and faux pas, the family moved back to Canada, where Le Billon unsuccessfully tried to institute the French food rules at her daughter's school. VERDICT By the end, Le Billon's obsession with French food culture and French children who obediently enjoy eating everything they are served becomes both annoying and exhausting. Parents looking to experiment with diet changes may wish to focus on the last chapter, which summarizes Le Billon's rules.—Pauline Baughman, Multnomah Cty. Lib., Portland, OR

Part cultural study, memoir, and children's food guide, Le Billon's book is a breezy but practical volume for hurried parents looking to keep their kids well-fed. A mother of two young girls (Sophie and Claire), the author recalls the year her family lived in Pléneuf Val-André, France, her husband Philippe's hometown on the Brittany coast. She compares North American eating habits (e.g., fast-food consumption, constant snacking) to French norms they learned along the way—"French parents gently compel their children to eat healthy food. They expect their kids to eat everything they are served, uncomplainingly." In due time, Le Billon (Eau Canada) drafts a set of rules for her daughters, strategies she believes readers can easily follow as well—parents should "schedule meals and menus;" "Kids should eat what adults eat: no substitutes and no short-order cooking;" and perhaps most importantly: parents "are in charge of food education!" Her tone is straightforward, generous, and gentle. That Le Billon concludes with a small collection of kid-friendly recipes—including a Five-Minute Fish en Papillote and Clafoutis (sweet cherry soufflé)—makes this kid-friendly foodie manifesto all the more accessible. (Apr. 3)