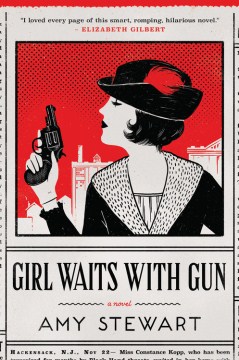 *Starred Review* In 1914, on a New Jersey farm, the three Kopp sisters—the pugnacious-yet-attractive, six-foot-tall Constance; the flibbertigibbet youngest, Fleurette; and the droll pigeon-keeper, Norma—defy convention by living alone after their mother dies. Self-sufficient and reclusive, Constance and Norma shelter themselves and their little sister from the world until a terrible incident forces them into the limelight. When silk baron Henry Kaufman rams and overturns their buggy with his motorcar, events conspire against the Kopp girls' continued independence. In fact, Kaufman's frightening threats and abuse of his workers put Constance on high alert: she keeps her sisters corralled indoors, fires shots at nighttime intruders, and works with the sheriff to personally bring down the merchant and his thugs. A sheer delight to read and based on actual events, this debut historical mystery packs the unexpected, the unconventional, and a serendipitous humor into every chapter. Details from the historical record are accurately portrayed by villains and good guys alike, and readers will cross their fingers for the further adventures of Constance and Sheriff Heath. For fans of the Phryne Fisher series by Kerry Greenwood, and the Mary Russell and Sherlock Holmes mysteries by Laurie R. King. Copyright 2014 Booklist Reviews.

Tall, independent-minded, and utterly uninterested in domesticity, Constance Kopp has an unfortunate run-in with an arrogant factory owner that leads to her becoming one of the country's first female deputy sheriffs (it's 1914). A huge tour and BookExpo America signing from Stewart, author of the New York Times best seller The Drunken Botanist.

In the summer of 1914 in rural New Jersey, the lives of Constance Kopp and her sisters take a dramatic turn. Their horse-drawn buggy is overturned in an accident with a motor car driven by local factory owner Henry Kaufman. Constance wants only an apology and the money owed to them for damages. Her determination in seeking justice puts her family in danger as the thuggish Kaufman begins a campaign of intimidation against them. Aided by the local sheriff, the Kopp sisters defend their home while Constance unravels a web of Kaufman family secrets and reckons with her own. In her engaging first novel, Stewart (The Drunken Botanist) draws from the true story of the Kopp sisters (Constance became one of the country's first female deputy sheriffs) and creates a welcome addition to the genre of the unconventional female sleuth. Colorful, well-drawn characters come to life on the page, and historical details are woven tightly into the narrative. The satisfying conclusion sets up an opening for future Constance Kopp novels. VERDICT Historical fiction fans and followers of Rhys Bowen's "Molly Murphy" mysteries and Victoria Thompson's "Gaslight Mystery" series will delight in the eccentric and feisty Kopp women. [See Prepub Alert, 3/25/15; library marketing.]—Sarah Cohn, Manhattan Coll. Lib., Bronx, NY

Hardened criminals are no match for pistol-packing spinster Constance Kopp and her redoubtable sisters in this hilarious and exciting period drama by bestseller Stewart (The Drunken Botanist). This is an elegant tale of suspense, mystery, and wry humor set in 1914 in Paterson, N.J. A crash between the Kopp sisters' horse and buggy and an automobile driven by arrogant factory owner Henry Kaufman begins a disturbing cycle of menacing behavior: Kaufman refuses to pay for the buggy damage, angry and humiliated in an embarrassing confrontation with a tall, imposing, and formidable woman. Intimidation and threats of violence follow Constance's every effort to make Kaufman pay, finally resulting in her appeal to the Bergen County Sheriff to help her collect. Sheriff Robert Heath has been itching to lock up Kaufman and his thuggish pals, and sees this as an excellent opportunity to rid Paterson of the pack of criminals. The Kopp sisters live alone on a remote farm and are taunted, burglarized, and shot at by crooks of the Black Hand gang as retaliation for involving the police and causing trouble for Kaufman. But when Constance starts to pack a revolver and doesn't hesitate to shoot back, the game changes drastically. A surprising Kopp family secret, a kidnapped baby, and other twists consistently ratchet up the stakes throughout, resulting in an exhilarating yarn. (Sept.)

Who is Vera Kelly?Knecht, Rosalie

The beekeeper's apprentice: or, on the segregation of the QueenKing, Laurie R.

The right sort of manMontclair, Allison