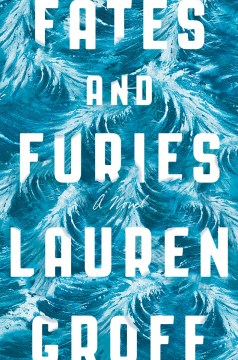 *Starred Review* This is a complex albeit harrowing look at marriage, not least because of Groff's dark and dazzling prose, which seduces the reader as much as the golden couple at the center of the compelling story. Glamorous Lotto and Mathilde marry at 22, much to the consternation of family and friends, who take bets on the year the marriage will dissolve. But the two stay married for decades, for they are, and remain, completely besotted with each other, possessed of a "terrible hunger" that will not be sated. The first half of the novel, entitled "Fates," gives lanky lothario Lotto's perspective on the marriage. He sees nothing but Mathilde's goodness ("the best person I know") and her unerring belief in his talent, and, after some years of struggling as an actor, Lotto finds great success as a playwright, which brings the couple both fame and wealth. The second half of the novel, "Furies," turns the lens on Mathilde and will upend readers' expectations, for she is possessed of a cold calculation that will surprise and even dismay. Taking a page from Gillian Flynn's Gone Girl–like view of marriage, Groff fashions a searing, multilayered portrait of a union that seems to thrive on its darkest secrets. Copyright 2014 Booklist Reviews.

Trust the author of the psychologically acute, award-winning best sellers Arcadia and The Monsters of Templeton to offer the portrait of a marriage not in dissolution. At 22, Lotto and Mathilde are creative partners and life partners, too, a dazzling couple madly in love. Ten years later, they're still in love, but each has a distinctive perspective on their relationship, and as Groff shows, the marriage continues to flourish because of secrets carefully held. In-house raves; publicists must all read their books once, but how many read a particular novel three times?

In this surprising and complex love story, Groff (Arcadia) explores the obsessive nature of love. The first half of the novel is told from the viewpoint of the magnetic Lancelot "Lotto" Satterwhite, whose pleasant childhood ends when his wealthy father dies, leaving him and his younger sister in the hands of their unbalanced mother, Antoinette. After a tortured adolescence spent at a boarding school, Lotto blossoms in college, becoming an acclaimed actor and an eminent womanizer—until he meets the mysterious loner, Mathilde. After the two marry impulsively, Antoinette cuts off Lotto from his inheritance, but he eventually finds fame as a playwright with Mathilde by his side. In the book's second half, we see events from Mathilde's perspective. While in the first section she seems quietly supportive, her character is revealed to have a dark undercurrent of cold calculation, and readers will question everything that has come before. VERDICT Like a classic tragedy, Groff's novel offers high drama, hubris, and epic love, complete with Greek chorus-like asides. A singular and compelling literary read, populated with extraordinary characters; highly recommended. [See Prepub Alert, 3/16/15.]—Joy Humphrey, Pepperdine Univ. Law Lib., Malibu, CA

In a swirling miasma of language, plot, and Greek mythology, Groff (Arcadia) weaves a fierce and gripping tale of true love gone asunder. Told in two interwoven parts, the fable-like story of Lancelot (Lotto) and Mathilde's 24-year marriage unfolds, first from Lotto's perspective, then Mathilde's. "Fates," the first part, takes readers through Lotto's mopey years as a failed actor living in "glamorous poverty" in New York City's Greenwich Village, his overnight success as a playwright, his struggles with aging, his perpetually hungry ego, his estrangement from his millionaire mother, and his gleeful infatuation with and dependency on his pale, bewitching wife. Meanwhile, Mathilde's all-consuming adoration for her husband doesn't completely jive with the dark secrets she's hiding from him. Of course, there's always the sex. Groff's prose is variously dewy, defiant, salacious, and bleak—a hurricane of words thrown together on every page. Yet so much of the power in this book lies in what's unspoken—Lotto's bottomless sorrow and self-pity flanked by Mathilde's white-hot rage and, later, her thirst for revenge. There are moments when the writing feels self-indulgent, but, for the most part, it's an intoxicating elixir. Perhaps Groff herself says it best: "It was less a story than a great creature surfacing from the deep; it was more sudden audible wave than narrative." Agent: Bill Clegg, the Clegg Agency. (Sept.)