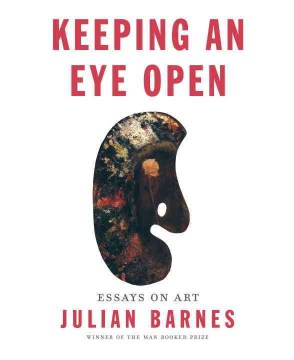 Whether he's writing Booker Prize–winning fiction (The Sense of an Ending, 2011) or delving essays, Barnes is a consummate stylist, not only because of his artistic command of language but also by virtue of his searching intelligence, incisive candor, rogue wit, and righteous fairness. He brings these fine-honed qualities, along with his fluency in human complexity, to art criticism, elevating the entire endeavor to a spirited form of inquiry into creators, creations, and their reception. And his subjects are magnetizing. Barnes' reassessment of French painter Édouard Vuillard is a standout as he parses the tricky intersection of biography and critical analysis. Personal elements enliven his keen scrutiny of the work of Swiss painter Félix Vallotton. Barnes vividly recounts the wretched tale of ineptness, shipwreck, cruelty, and horror that inspired Théodore Géricault's shrewdly composed The Raft of the Medusa. Fantin-Latour, Braque, Magritte, Redon, Freud (Lucian)—all are given the invigorating Barnes treatment as he tracks the course art (especially French painting) took as it made its leaping, alarming, liberating way from romanticism to modernism. Handsomely illustrated, superbly written, felicitously thought-provoking. Copyright 2014 Booklist Reviews.

Man Booker Prize winner and best-selling novelist Barnes here collects 17 of his essays on art—not so unexpected when you consider that his 1989 novel, A History of the World in 10½ Chapters, has a chapter on Géricault's magnificent The Raft of the Medusa. As Barnes himself says, "Flaubert believed that…great paintings required no words of explanation. Braque thought the ideal state would be reached when we said nothing at all in front of a painting…. But it is a rare picture that stuns, or argues, us into silence. And if one does, it is only a short time before we want to explain and understand the very silence into which we have been plunged." Here's to understanding painters from Delacroix to Magritte to Lucian Freud.

This impressive title examines 19th-century French art as a manly morality tale beginning with romanticism in 1825 and extending up to cubism in 1925. Four final chapters address English and American art since World War II. Barnes is a well-known, multi-award-winning English author of fiction (A History of the World in 10½ Chapters; Flaubert's Parrot) and nonfiction (The Pedant in the Kitchen; Nothing To Be Frightened Of). This volume assembles key book and exhibition reviews Barnes published in leading journals such as Modern Painters and the New York Review of Books since the 1980s. The author digs into fascinating details of isometric proportions based on many scholarly biographical and autobiographical works. Some illustrations are absent, but they can be pieced together by readers. Both artists and their clients have been aware of the destructive effect of industrialization for hundreds of years, and this book explores its impact on the socioeconomic base in the lives of artists and the forms of paintings. VERDICT Comparable to New Yorker art critic Peter Schjeldahl's Let's See, Barnes's latest is highly recommended to all art readers. [See Prepub Alert, 4/13/15.]—Peter S. Kaufman, Boston Architectural Ctr., MA

In these sharply observed essays, English novelist Barnes (Sense of an Ending), levels a fine critical eye at the visual arts, principally focusing on French painting and the transition from romanticism to modernism. The Booker Prize–winning novelist first wrote about art for his novel A History of the World in 10 ½ Chapters (1989), which contains a study of Théodore Géricault's Raft of the Medusa; that study is this collection's stirring opener. French art remains Barnes's forte, and the book includes pieces on Eugène Delacroix, Édouard Manet, Odilon Redon, and Georges Braque. He submits thoughts on these and other artists with sentences that coolly snap and continually delight. In his wonderful study of Edgar Degas's portrayals of women, Barnes knocks down the charge of misogyny and shows an argumentative spirit that is somewhat wanting in other places. "Do you constantly and obsessively fret at the representation of something you dislike or despise?" he provocatively asks. Barnes also revisits Édouard Vuillard's late paintings and Henri Fantin-Latour's star-studded group portraits; vividly brings out the crude bravado of Gustave Courbet, "a great painter, but also a serious publicity act"; and questions some of the more astronomical praise of Paul Cézanne. He is equally deft on non-French artists, too. Pop artist Claes Oldenburg's work is "about as political as a hot dog," and Lucian Freud's pictures are exclusively about the "here and now." It's both a pleasure and an education to look over Barnes's shoulder as he interrogates, wonders at, and relishes works of art. He's a critic who prioritizes the objects themselves, and his work is always satisfying. Illus. (Oct.)