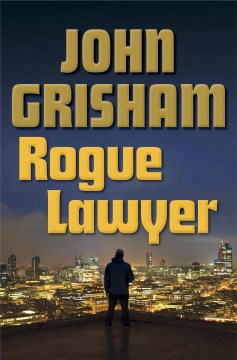 There comes a moment in this book when the reader is likely to think: "Ah, now I see what he's doing." At first, the novel appears to be a series of tenuously related episodes in the life of defense attorney Sebastian Rudd, who operates his practice out of a customized van and who actively seeks out big cases and doesn't shy away from the media or from breaking the occasional rule. The cases include the murders of two girls; a man on trial for shooting a police officer (during a raid on the man's house); the abduction of a pregnant woman; and a prison break. They feel, at first, like stand-alone stories, but at some point past the halfway mark, they begin to link up, and we realize that Grisham is trying to show us the fabric of Rudd's working life—chaotic, unpredictable, with several cases going on at the same time. Rudd shares some literary DNA with Michael Connelly's Mickey Haller (the Lincoln Lawyer), but Grisham's hero is no rip-off. Rudd is a complex, compelling character, who, we hope, will appear again and again. HIGH-DEMAND BACKSTORY: The Grisham name, of course, is all that's needed to ensure an audience, but this time he delivers a quality thriller to go with the brand. Copyright 2014 Booklist Reviews.

No word on plot, character, or setting here. My closest guess on mood, given the title? In The Appeal, Grisham says, "Trial lawyers, always a colorful and eclectic bunch. Cowboys, rogues, radicals, longhairs, corporate suits, flamboyant mavericks…. They were anything but boring." Expect not to be bored.

In his latest, Grisham introduces Sebastian Rudd, a renegade street lawyer with an unconventional yet right-minded approach toward advocating for the powerless. Rudd's cases involve social misfits—all wrongfully accused. There's the drug-addled sexual pervert from a satanic cult, wanted for molesting and drowning two little girls; a Mafia mobster on death row, charged with killing a judge; and a retired homeowner, falsely suspected of drug trafficking and accused of shooting at a SWAT team invading his home. Loathing the legal system and his town's redneck citizens, Rudd intimidates both the local police and judges when seeking a reprieve or dismissal of a case. He also passes choice tidbits to reporters to generate support. However, his most difficult legal battle is with his estranged wife who's waging an ongoing battle to end visitation rights with their young son. VERDICT Grisham devotees will enjoy a compelling and convincing plot propelled by a memorable protagonist who constantly defends his roguish actions and justifies his unconventional behavior. [See Prepub Alert, 4/27/15.]—Jerry P. Miller. Cambridge, MA

Sebastian Rudd, the narrator of this uninspired legal thriller from bestseller Grisham (Gray Mountain), describes himself a "lone gunman, a rogue who fights the system and hates injustice." Working in an unspecified Southern state, Rudd isn't afraid to defend unpopular clients, starting with a "brain-damaged eighteen-year-old dropout" named Gardy, who's charged with murdering two young girls. Since everyone is convinced of Gardy's guilt, Rudd faces a tough slog in trying to spring him and nail the real killer. Frequent death threats force him to live a nomadic and isolated existence. His sole friend is his bodyguard and confidant, known only as Partner. Grisham tries to humanize Rudd by making him the backer of an up-and-coming mixed martial artist, as well as the father of a second grader raised by his ex-wife and her current female partner, but he's more a stereotype than a full-blooded character. Some later plot developments, including the climactic jury trial, strain credibility. Agent: David Gernert, Gernert Company. (Oct.)

Leader of the packRosenfelt, David