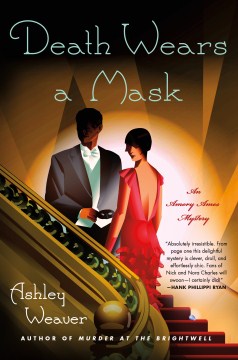 Milo and Amory Ames have tried to put the murder at the Brightwell Hotel behind them; working to rebuild their marriage, they have plunged into the London social scene of the 1930s. Invited to a dinner party with 10 others at the home of Serena and Lloyd Barrington, friends of Amory's mother, they have no thoughts that they might be regarded as amateur sleuths—until Serena asks Amory to find out who is stealing her jewels. A piece goes missing, she claims, every time they have this particular group to dinner. Serena and Amory plan a trap at an upcoming masquerade ball hosted by one of the guests, the noted roué Lord Dunmore, but Serena's nephew is murdered instead. The event is reported in all the scandal sheets, and DI Jones, from Murder at the Brightwell (2014), is on the scene, having been transferred to Scotland Yard. This time he actively involves Amory, asking her to discover the connections among the party guests during a seemingly innocent round of social calls. Weaver has followed up her debut novel with another engaging closed-house mystery sure to appeal to Agatha Christie devotees. Copyright 2014 Booklist Reviews.

When she's not working as technical services coordinator at the Allen Parish Libraries in Oberlin, LA, Weaver writes mysteries, debuting last year with Murder at the Brightwell, a LibraryReads pick set in 1930s England. In this follow-up, Amory Ames hopes to catch a jewel thief at a decidedly extravagant masked ball, but then a guest is murdered, even as rumors cast suddenly agreeable husband Milo as a faithless spouse—again.

A few months after the events that took place at the Brightwell Hotel (recounted in Murder at the Brightwell), Amory is dining with the Barringtons and several other society types in London when Serena Barrington asks her to help catch who is stealing Serena's jewels. The two women concoct a scheme to catch the thief at Lord Dunmore's masked ball, but their plans go awry when Serena's nephew is murdered. Meanwhile, Amory and Milo, her husband, are still feeling their way back to a comfortable relationship amid rumors of infidelity on his part. VERDICT Librarian Weaver, whose series debut was tapped by the Reference and User Services Association (RUSA) Reading List as the best mystery of 2015, has whipped up a delicious confection of a mystery set in 1930s England. It sparkles with personality and an appealing plot. Devotees of golden age authors such as Agatha Christie as well as contemporary writers such as Rhys Bowen and Barbara Cleverly will settle down in their cozy armchairs for a pleasurable read. [See Prepub Alert, 4/11/15; library marketing.]

Set in London in 1932, Weaver's delightful second mystery featuring British socialite Amory Ames (after 2014's Murder at the Brightwell) finds Amory reluctantly agreeing to investigate a jewel theft for Serena Barrington, a friend of her mother's. Possible thieves include dashing and disreputable Lord Dunmore, a charming but sinister tennis player, and a pair of impecunious sisters. When Mrs. Barrington's hapless nephew is murdered at Dunmore's masked ball and stolen jewels are discovered in his lordship's pockets, Detective Inspector Jones asks for Amory's help in gathering information from upper-crust suspects. Meanwhile, she fends off advances from Dunmore and copes with her devil-may-care husband Milo's tabloid-fodder relationship with a French actress. Weaver peoples the novel with entertaining secondary characters, but a lack of backstory leaves questions about Amory's relationship with Milo unanswered, and the resolution to their marital difficulties seems hasty and unconvincing. Still, readers will hope to see a lot more of the sophisticated, elegant Amory. Agent: Ann Collette, Rees Literary Agency. (Oct.)

Penny for your secretsHuber, Anna Lee

After the Armistice ball: a Dandy Gilver murder mysteryMcPherson, Catriona, 1965-