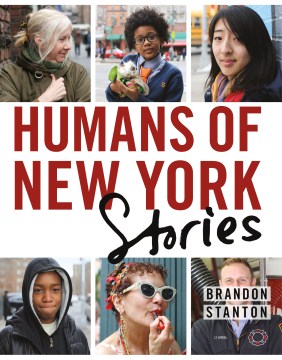 First came the blog Humans of New York, featuring images and interviews with folks photographer Stanton encountered after he moved to the city in summer 2010. Then, when his audience hit a million, there came the 2013 book Humans of New York, which stepped right up to the top spot on the New York Times best sellers list. As Stanton's work has progressed, his interviews have dug deeper, as evidenced here by this collection of extended stories. With color photos throughout.

Stanton, street photographer and creator of the blog humansofnewyork.com, again takes to the streets of Gotham in this follow-up to his best-selling 2013 book of the same name. This time, the author allows each subject to be examined in a raw state, putting the focus on their inspiring quotes and commandeering the heart of the reader. In this way, Stanton more than succeeds in bringing street life to light, establishing a message that no matter what borough, social, or economic background, and despite age differences, we all have a story—and his subjects are ready to tell theirs. What started in 2010 as a zealous project for the former day trader has resulted in more than 400 pages of sheer inspiration. This is a well-crafted work; each image and story is strategically placed. VERDICT For inspiration seekers and anyone with a pulse. [See Prepub Alert, 5/6/15.]—Tamikka Malloy, Camden Cty. Coll. Lib., Blackwood, NJ

Six months after Stanton got his first camera in 2010, he lost his job as a bond trader. Before that, he'd been spending his weekends photographing everything he could find in Chicago, returning home with more than 1,000 images each day. After a weekend trip to New York City floored him with the city's wide variety of inhabitants, Stanton packed his bags and returned to launch "Humans of New York," a photo blog that soon morphed into a Facebook page that garnered over 500,000 fans in a little over a year. Here, he presents his most striking images accompanied by commentary from his subjects. Many photo essays of this type have a singular topic in mind, such as highlighting urban blight or homelessness. Stanton doesn't shy away from those topics, but he doesn't dwell either, preferring to offer a more optimistic view of his fellow New Yorkers. There's the Yugoslavian janitor who studied for 12 years to earn his classics degree; Banana George, the world's oldest barefoot water-skier who's now in a wheelchair; Muslims in prayer; and shots of adorable kids, crazy fashionistas, and young lovers, all paired with a comment from Stanton or from the subjects themselves. There's no judgment, just observation and in many cases reverence, making for an inspiring reading and visual experience. Photos. Agent: Brian DeFiore, DeFiore and Co. (Oct.)

The latest from Stanton (Humans of New York), creator of the "Humans of New York" blog, which currently has over 14 million followers, is another rich collection of photographs of people from the streets of New York City and their stories. The strength of his work is the range of perspectives and experiences he captures. His subjects vary in age, nationality, religion, and other demographics, and their individual stories reflect on different facets of the human experience, from struggles to heartbreak to inspiration. Some of his subjects tell him about past experiences steeped in nostalgia, while others consider their present and future predicaments. A powerful four-page spread shares the story of a student from Mott Hall Bridges Academy who named the principal of his school as the biggest influence in his life, inspiring Stanton to visit the school, photograph the principal, and hear her story. Another photo shows the same student and principal with President Obama in the Oval Office, followed by a portrait of the president and the story of his own greatest influence. New readers and seasoned fans can't help but become engrossed with the stories Stanton tells. Color photos. (Oct.)