This side of wild : mutts, mares, and laughing dinosaurs / Gary Paulsen ; illustrated by Tim Jessell. 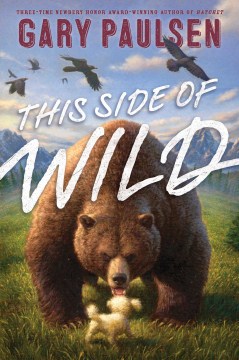 Just when you might have thought Paulsen had depleted his well of stories about life with animals comes this memoir. A plucky poodle, vengeful ravens, and a mynah bird that could channel President Kennedy's voice are among those he introduces readers to in this episodic book of anecdotes. The structure is loose and meandering—the author of Hatchet (1987) comes across as an amiable friend—but the meaning at the heart of the book is clear: animals are amazing. As Paulsen says, "We don't own animals. . . . / We live with them. / We get to live with them." A case in point is Gretchen, a coffee-drinking dog he encountered when he was feeling overwhelmed by his lessons from the army's nuclear-warhead school. Visiting the gentle canine and her owner gave the young man a chance to get outside himself and communicate with someone who truly seemed to listen on a deeper level. For anyone who loves the natural world and excellent writing, this is a must-read. Copyright 2014 Booklist Reviews.

Renowned author and outdoorsman Paulsen recounts personal anecdotes of remarkable encounters that challenge our perception of animals as simplistic creatures. Through a conversational, free-flowing narrative, Paulsen's strong prose and the compelling subjects of his chosen stories reinforce the central theme that animals should be recognized as compassionate, intelligent, and heroic partners in life's journey. Pen-and-ink sketches illustrate the stories.