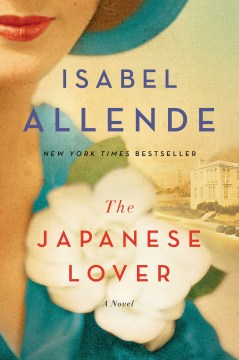 Themes of lasting passion, friendship, reflections in old age, and how people react to challenging circumstances all feature in Allende's newest saga, which moves from modern San Francisco back to the traumatic WWII years. As always, her lively storytelling pulls readers into her characters' lives immediately. Irina Bazili, personal assistant to elderly designer Alma Belasco, suspects her employer has a lover. What else would explain her secretive excursions from her nursing home and the mysterious yellow envelopes arriving in Alma's mail? Intervening sections reveal the lifelong bond between Alma, a Polish Jewish refugee sent to live with California relatives in 1939, and Ichimei Fukuda, sensitive youngest son of her family's gardener. Despite many separations over the years, their love remains strong. Descriptions of the Fukudas' forced internment at a Utah camp, where life continues behind barbed wire, create a memorable impression. Equally haunting is Irina's painful backstory, which skillfully unfolds. Although not as complex or richly detailed as Allende's earlier novels, the story has many heartfelt moments, and readers will be lining up for it.HIGH-DEMAND BACKSTORY: Big publisher push indicates her novel will be reviewed as widely and read by the public as enthusiastically as all of her previous well-received novels. Copyright 2014 Booklist Reviews.

Who is sending lovely little cards and gifts to Alma Belasco, a resident of San Francisco's Lark House nursing home? To find out, we'll have to go back to 1939, when Alma's parents send her from Poland to San Francisco to live with a wealthy aunt and uncle after Germany invades. She and Ichimei Fukuda, the Japanese gardener's son, fall in love but are wrenched apart when thousands of Japanese Americans are interned during the war. Through the decades, they keep their passion alive—and secret. With a ten-city tour.

When they first met as children in California in the early days of World War II, Alma Belasco and Ichimei Fukuda were inseparable. Alma's Polish family had sent her to live with her wealthy aunt and uncle to ride out the war, while Ichimei's father, the Belascos' groundskeeper, was a respected friend of Alma's uncle. Pearl Harbor and the interment of Japanese Americans separated Alma and Ichimei for years. When they reconnected, friendship turned to passionate love nurtured by the realistic workarounds that stood in place of a life together. Throughout the years, despite spouses and children, the two met whenever possible. But 70-plus years in, Alma's health is failing at the quirky senior citizen facility, Lark House, and her grandson and his sweetheart, Alma's devoted caregiver, are in a race against time to get the full scope of her tender, flawed, enduring love story on paper before it's too late. VERDICT Allende's latest (Maya's Notebook), a glorious family saga, with its rich cast of decent, complex characters caught up in America's struggles with war, prejudice, AIDS, and society's old taboos that are fast disappearing, is a beautiful tribute to devotion. Readers will do well to savor Allende's literary artistry. [See Prepub Alert, 5/11/15; No. 1 November LibraryReads Pick.]—Beth Andersen, formerly with Ann Arbor Dist. Lib., MI

Allende's (The House of Spirits) magical and sweeping tale focuses on two survivors of separation and loss: the elderly, renowned designer Alma Belasco, whose silk-screened creations fuel the family foundation, and her young secretary, mysterious Irina Bazili, who works at the progressive old people's home, Lark House, where Alma lives. Their narratives, however, go far beyond the retelling of Alma's remarkable affair with a Japanese gardener's son, Ichimei Fukuda, its heartbreaking end, and her subsequent marriage to loyal friend Nathaniel—or Irina's heartbreaking struggle to break free of her haunting past. Allende sweeps these women up in the turmoil of families torn apart by WWII and ravaged by racism, poverty, horrific sexual abuse—and old age, to which Allende pays eloquent attention. "There's a difference between being old and being ancient," Irina is told. "It doesn't have to do with age, but physical and mental health.... However old one is, we need a goal in our lives. It's the best cure for many ills." Befitting the unapologetically romantic soul bared here—the poignant letters to Alma from Ichimei are interspersed throughout—love is what endures. (Nov.)

America is not the heartCastillo, Elaine

And the mountains echoedHosseini, Khaled