A banquet of consequences : a Lynley novel / Susan Elizabeth George. 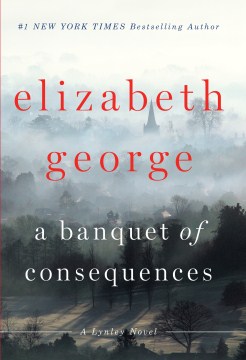 *Starred Review* The impetuous behavior of DS Barbara Havers, which has embarrassed her New Scotland Yard superiors in the past, has been curbed by threat of a transfer. But a reigned-in Havers lacks the spark that made her such a valued colleague to DI Thomas Lynley, who manipulates circumstances for Havers to pursue a murder case outside her jurisdiction. Feminist author Clare Abbott's death is thought to be caused by a seizure and heart attack, but a second autopsy shows that she was poisoned. Weeks later, Abbott's editor and close friend, Rory Statham, nearly dies from the same poison. Suspicion and circumstantial evidence center on Abbott's assistant, Caroline Goldacre, an increasingly volatile pathological liar still grieving the suicide of her younger adult son years earlier. Havers, paired with DS Winston Nkata, and Lynley join forces to eventually uncover secrets behind the breach between Abbott and Goldacre. This nineteenth Lynley novel is a sterling addition to George's acclaimed character-centered series: even the most minor characters are full-bodied, and the personal lives of Lynley and Havers are advanced nicely. Although an eleventh-hour revelation falls a bit flat (despite ringing true), George's fluid prose and intricate plotting should delight fans and win new ones. Copyright 2014 Booklist Reviews.

George's 19th entry in her series featuring Scotland Yard's DI Thomas Lynley and DS Barbara Havers (after One Evil Act) finds Havers busy keeping her nose clean to protect her job. Lynley worries that her caution is making her a less effective police officer. Meanwhile, she tries to build some semblance of a life for herself by attending a lecture by a celebrated feminist author named Clare Abbot. When Abbot dies suddenly of heart failure, her editor and friend Rory Statham is suspicious and asks Havers to investigate. A second autopsy reveals evidence of poisoning. Lynley helps Havers finagle her way into overseeing the case in Dorset where the author had lived. Her digging reveals a great deal about Abbot's personal assistant. Apparently Abbot was researching the woman's background, but why? The mystery is slowly unraveled, and the solution is shocking. VERDICT Readers who relish a measured pace and steadily built suspense will be hooked by this psychologically complex crime novel. George's many fans as well those who enjoy Tana French or Louise Penny will also be enthralled. [See Prepub Alert, 4/13/15.]—Kristen Stewart, Pearland Lib., Brazoria Cty. Lib. Syst., TX

Since 1988's Agatha and Anthony Award-winning A Great Deliverance, George has turned out 19 novels starring Inspector Lynley, eighth Earl of Asherton, and Sgt. Barbara Havers, his working-class partner, often hitting the top spot on the New York Times best sellers list. Now here's the 20th entry in the series, which takes our protagonists from Cambridge to London to rustic Shaftesbury on a particularly twisty case. With a 250,000-copy first printing.

A threatened transfer to the north of England subdues Det. Sgt. Barbara Havers of London's Metropolitan Police in bestseller George's uneven 19th Lynley novel (after 2013's Just One Evil Act). Barbara's investigation of the murder of feminist writer Clare Abbott leads her to the writer's personal assistant, Caroline Goldacre, a middle-aged busybody who verbally abused and threatened Clare. The author sensitively depicts Det. Insp. Thomas Lynley, Barbara's partner, as he puts his own job on the line to help her. Barbara's secretary's efforts to send her on dates provide some comic relief. Unfortunately, the novel becomes bogged down exploring Caroline's extensive family problems—divorce, adultery, child abuse, marital squabbles—to the point where readers may begin to worry they have stumbled by mistake into a sprawling family saga. Both the detectives and the mystery recede into the background in an entry that may try the patience of even the most dedicated series fans. Six-city author tour. Agent: Robert Gottlieb, Trident Media Group. (Oct.)

The man with a load of mischiefGrimes, Martha