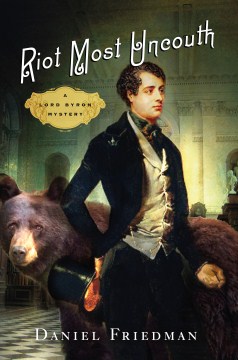 In 1807, Lord Byron is attending Trinity College in Cambridge, flouting every rule and shocking society with his profligate behavior. Upon learning that an acquaintance, Felicity Whippleby, has been brutally murdered, Byron determines that he must use his romantic poet's eye for details and subtext and apply his skills to find the murderer. He takes his pet bear, the Professor, to the scene of the crime; angers the constable; and tangles with Felicity's fiancé in an attempt to have him arrested. Then the investigator Felicity's father sent from London arrives, a well-mannered retired military man. Despite being in a state of near constant drunkenness, Byron realizes that it is really up to him to find the truth or be arrested himself. Even though the crime is grisly and Byron's debauchery distinctly wanton, Friedman laces the narrative with comic moments, wry observations on noble privilege, and excellent plot turns. Copyright 2014 Booklist Reviews.

"Mad, bad, and dangerous to know" is how anyone would describe George Gordon Byron at Trinity College in Cambridge in 1807. Son of "Mad Jack" Byron and a Scottish heiress, Lord Byron writes poetry, keeps a bear in his rooms, and refuses to attend lectures. When he learns a young woman has been brutally murdered near his chambers, he decides any poet would be remiss in not investigating this manifestation of the darker side of men's psyches. VERDICT This intricately plotted and well-researched historical series debut by Macavity Award winner Friedman (Don't Ever Get Old) blends sprightly dialog and compelling, well-drawn characters for a pleasurable read that is sure to enthrall English lit majors as well as readers who enjoy the Regency mysteries of Kate Ross and Rosemary Stevens. [For another famous English crime-solving author, see Stephanie Barron's Jane and the Waterloo Map, reviewed on p. 80.—Ed.]

Thriller Award–finalist Friedman (Don't Ever Look Back) succeeds in making his unique blend of humor, crime, and an unusual protagonist work in the first of a new series starring the famous Romantic poet. In 1807, Byron is a student at Cambridge, but his attitude toward his studies couldn't be more cavalier. Instead of spending any time learning, the irreverent Byron, who regards himself as the world's greatest poet, indulges his appetite for alcohol and women, while keeping a pet bear he's named the Professor in his rooms. When Miss Felicity Whippleby is slaughtered near Trinity College, her blood drained from her body, Byron decides that his gifts extend to detection. His efforts soon conflict with those of two professional sleuths, each apparently hired by the victim's father. The killer strikes again, and the nature of the crimes reminds the poet of the legends of vampires his father used to recount. Besides adroitly placing the major plot twists, Friedman manages to make one of the most obnoxious leads in recent memory oddly endearing and even sympathetic. Agent: Victoria Skurnick, Levine Greenberg Literary Agency. (Dec.)

Oscar Wilde and a death of no importanceBrandreth, Gyles Daubeney, 1948-

The casebook of Victor FrankensteinAckroyd, Peter, 1949-

The prince and the prosecutor: a Mark Twain mysteryHeck, Peter J.

Jane and the madness of Lord ByronBarron, Stephanie
Murder as a fine artMorrell, David

Death comes to the villageLloyd, Catherine, 1963-