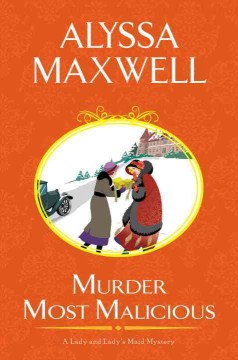 The residents of Foxwood Hall and their guests are celebrating their first peacetime Christmas after WWI when one of the guests, Henry Leighton, Marquis of Allerton, disappears. Then bits of him turn up in some of the Christmas boxes given to staff and local villagers. When one of Foxwood Hall's footmen is accused of the murder, 19-year-old Lady Phoebe Renshaw, believing in the footman's innocence, investigates, with the reluctant aid of her lady's maid, Eva Huntford. Lady Phoebe is also interested in finding the murderer because her sister argued with Henry the night before his disappearance, and Julia has a secret that Henry threatened to expose. Told from both Phoebe's and Eva's points of view, one investigating above stairs, the other below, the two gather evidence and share information, solving the murder while almost losing their lives in the process. Details of the lives of the nobility and their servants, and the aftermath of the war, are woven throughout the story, and the forward-thinking Phoebe is a charming main character. Copyright 2014 Booklist Reviews.

The Great War is over, and those who remain at Foxwood Hall have survived the influenza epidemic of 1918. At Christmastide, Lady Julia Renshawe Wroxly is expected to announce her engagement to the Marquis of Allerton. But the festivities on Boxing Day (when the servants are handed their gifts from the Wroxly family) reach a sober conclusion after the presents are unwrapped. It becomes apparent something horrible has happened to Lord Allerton, who has not been seen in two days. Lady Phoebe and her maid Eva Huntford decide to investigate. VERDICT The author of the "Gilded Newport" mysteries (Murder at the Breakers) switches locations and historical periods for her new series debut. Downton Abbey fans will enjoy Maxwell's evocative descriptions of a particular society as it transitions from the Edwardian Age to modern times. Lady Phoebe is torn between her life before the war and her desire to become a modern woman.

Set in England, Maxwell's entertaining first in her Lady and Lady's Maid series opens with an argument between Lady Phoebe Renshaw and Henry Leighton, Marquess of Allerton, on Dec. 25, 1918, at Foxwood Hall. The next day, Leighton goes missing, and evidence of his demise turns up in several Christmas packages the Renshaw ladies prepared as gifts for their servants. Lady Julia, Phoebe's sister, along with Julia's personal maid, Eva Huntford, become an unlikely but clever pair of sleuths, eliminating the houseful of guests as suspects and locating Leighton's body. Ignoring Constable Miles Brannock's warnings to leave the detecting to him and his fellow officers, Julia realizes that even Phoebe isn't above suspicion. Both ladies are attracted to certain men involved in the mystery, but identifying the killer takes precedence over any romantic notions. Some of the characters and scenes are highly reminiscent of TV's Downton Abbey, but Maxwell (Murder at Beechwood) makes Phoebe and Eva distinctive personalities in their own right. Agent: Evan Marshall, Evan Marshall Agency. (Jan.)