Fool me once / Harlan Coben. 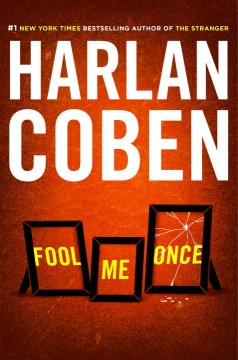 Combat pilot Maya Burkett's last mission ended in tragedy, with civilians killed during a rescue of stranded soldiers. Now, in best-selling Coben's latest, she's settling into a new life with her husband, Joe, and two-year-old daughter, Lily—until she witnesses her husband's murder. Suddenly a single mother, plagued by nightmares and PTSD, Maya accepts the gift of a nanny cam disguised as a picture frame to help her keep an eye on her daughter while she's at work. Her life seems calmer, until she checks the cam's video images and sees her husband. Could he really be alive? Or is someone trying to convince her she's losing her mind? The video galvanizes Maya, and she becomes a woman with a mission, armed and dangerous, as she looks for answers among dark secrets from the past. Coben excels in setting up the requisite whom-can-she-trust scenario. The pace never falters, buoyed by Maya's urgent investigations and the myriad plot twists, which keep readers off balance, wondering what's happening and whom to believe. Coben is one of those genre authors who has crossed over to mainstream popularity and just keeps building his brand. No changes here. Copyright 2014 Booklist Reviews.

You would think that former special ops pilot Maya would be happy to see husband Joe on the nanny cam playing with their two-year-old daughter, but she's shocked; Joe was murdered two weeks previously. Coben is an Edgar, Shamus, and Anthony award winner with eight consecutive No. 1 New York Times best sellers to his credit.

Capt. Maya Stern Burkett, the heroine of this stellar standalone from Edgar-winner Coben (The Stranger), has suffered more than her fair share of tragedy. Her career as a U.S. Army helicopter pilot came to an end after whistle-blower Corey Rudzinski exposed the civilian deaths caused by her actions in Iraq. Even worse, her husband, Joe Burkett, is shot to death in front of her in Manhattan's Central Park, though Maya is able to give a good description of the masked killers to an NYPD homicide detective. Maya is already dealing with the nightmares from her combat experiences and the murder of her sister, Claire, four months earlier while Maya was stationed in Kuwait. Then, weeks after Joe's funeral, a recently installed nanny cam shows her two-year-old daughter, Lily, crawling onto Joe's lap. Other shocks follow. Implausible links arise between Joe's death and Claire's, and she must face the possibility of more revelations from Rudzinski. Coben is like a skilled magician saving the best, most stunning trick for the very end. Five-city author tour. Agent: Lisa Erbach Vance, Aaron Priest Literary Agency (Mar.)