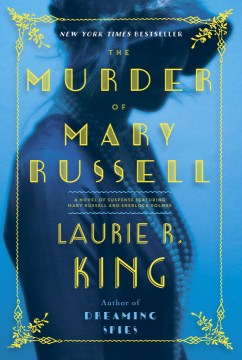 *Starred Review* Devoted readers of King's Mary Russell series, which reimagines the Sherlock Holmes mythos by giving the detective a young, brilliant wife, are in for a treat here, though the book's title may give them pause. When the story begins, there's blood on the floor of Russell and Holmes' house in Sussex, thanks to the appearance of Samuel Hudson, the son of the couple's longtime housekeeper, Mrs. Hudson. Perhaps to readers' surprise, the focus of this novel is that same Mrs. Hudson, who, in the original Conan Doyle stories as well as in the earlier installments in King's series, has spent most of her time making tea and bringing in the mail. Now we learn about her suspect background as well as her tangled relationship with Holmes. It's a well-crafted tale with occasional interruptions that unravel Mary's fate. In a triumph of plotting, King also incorporates characters and information from an original Holmes story, "The Adventure of the Gloria Scott" (with further explanation in an author's note). From a suspense point of view, this may not have readers on the edge of their seats, but it is delightful in every other way; and fans, always hungry to know more personal details about King's iteration of Sherlock Holmes and his world, will get a few more delicious tidbits this time around. HIGH-DEMAND BACKSTORY: Fans wait eagerly for every new installment of the Russell-Holmes pairing, and the seeming shock of the title will have them diving into this one with reckless abandon. Copyright 2014 Booklist Reviews.

Where's Mary Russell, wife of Sherlock Holmes? No one knows, but the carpet at 221B Baker Street is soaked with blood. Now publicity (not to mention the title) is making us worry that this is the end of Mary Russell—and King's long-running series. The last eight titles have all been top 20 New York Times best sellers, and 2015's Dreaming Spies was a LibraryReads pick. Look for the original eShort, The Marriage of Mary Russell, to set the stage for this book in March 2016.

In spite of the title, this 14th novel in the series (after Dreaming Spies) is really all about Mrs. Hudson, the longtime housekeeper to Sherlock Holmes. King takes the opportunity to create and explore extensively Mrs. Hudson's backstory, including how she met Holmes and came to be his landlady at 221B Baker Street. We learn that Clarissa Hudson was not always the prim purveyor of tea and telegrams familiar from the Arthur Conan Doyle stories. Instead, she was an adventuress who used her skills at mimicry to survive in a rough world. This novel is filled with suspenseful elements such as the promise of lost treasure, shipwrecks, illegitimate children, and Russell's apparent murder. VERDICT Patient readers will be rewarded by the rich character development and further filling out of King's complex world. Best for fans of historical mysteries and those who enjoy other portrayals of Sherlock Holmes on TV shows such as Sherlock and Elementary. [See Prepub Alert, 10/12/15.]—Laurel Bliss, San Diego State Univ. Lib.

Edgar-winner King's subpar 15th Mary Russell novel (after 2015's Dreaming Spies) opens on a quiet morning in Sussex in May, 1925. Against her better judgment, Mary, the independent wife of Sherlock Holmes, admits a stranger to her cottage, who says he's Samuel Hudson, the son of her housekeeper and surrogate mother, Clara Hudson. Her misgivings prove warranted when he confronts her with a gun. Clara returns home to find Mary missing, a pool of blood on the floor, and the smell of gunpowder in the air. With Mary's fate unresolved, the focus shifts to Clara, the daughter of a criminal implicated in Holmes's very first case. Mary and Holmes fade into the background amid some florid prose ("I looked into his pale eyes, the bones of my chest cringing away from thirteen grams of leaden death"). This atypical entry will appeal mostly to longtime series fans. Agent: Linda Allen, Linda Allen Literary Agency. (Apr.)

The case of the missing marquess: an Enola Holmes mysterySpringer, Nancy

And only to deceiveAlexander, Tasha, 1969-

A study in scarletDoyle, Arthur Conan, Sir, 1859-1930
Sister beneath the sheetLinscott, Gillian