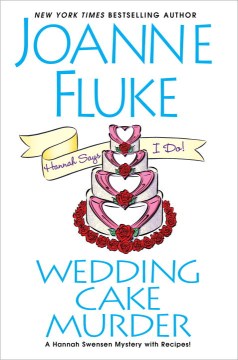 Fans of Fluke's Hannah Swensen series have long waited for Hannah to choose a fiancé and get married. We're getting closer, but before Hannah can marry Ross Barton, she must compete in a reality-TV dessert competition; with the help of her sister, Michelle, Hannah bakes enough traditional creations with unique new twists to keep readers hungry. After Hannah wins some early rounds, the competition moves from New York to Lake Eden Inn in Hannah's hometown. During a practice session, Michelle finds a celebrity chef dead in the walk-in cooler. Chaos reigns, but Hannah is determined to solve the murder before the investigation gets in the way of her wedding. There are plenty of Fluke's trademark recipes on view here, and the New York trip and reality-show frame give the episode a fresh twist. Readers may have some trouble buying the equanimity with which Hannah's scorned boyfriends accept her decision to marry Ross, but that won't detract much from our anticipation of what comes next. Copyright 2014 Booklist Reviews.

Hannah's wedding day is here at last! Groom Ross Barton is just the right counterbalance to Hannah's roller-coaster sleuthing and baking life. However, before the festivities commence, Hannah participates in a TV celebrity chef baking competition. She and her sister, Michelle, feel out of their depth. After all, the Cookie Jar in Lake Eden, MN, is not exactly New York City. Then, chef Alain Duquesne, the contest's judge, is murdered. Still, the show must go on, so Hannah and Michelle investigate while prepping for the contest. VERDICT Fans' romantic expectations for Hannah and Ross culminate in the 19th volume (after Double Fudge Brownie Murder) of the long-running series. Everyone's favorite chef gives us over 20 recipes, including her wedding confection, Double Rainbow Swirl cake. Expect huge demand.

Bestseller Fluke's frothy 19th Hannah Swensen Mystery (after 2015's Double Fudge Brownie Murder) finds the guileless Lake Eden, Minn., baker both a bride to be and a contestant in the Food Channel's Dessert Chef Competition. Her meddlesome mother, Delores, has assumed the role of wedding planner, leaving Hannah free to focus on her confections, but when head judge and celebrity chef Alain Duquesne is murdered midcontest and her sister, Michelle, finds the body, Hannah feels honor-bound to catch his killer. Readers in search of a fair-play whodunit may deem Hannah's latest adventure dissatisfying; Fluke back-burners the mystery in favor of the cooking competition and Hannah's impending nuptials, and the book features more recipes than suspects or clues. The plot relies too heavily on coincidence, but Fluke's cast is lively and winsome enough to carry the tale, and long-standing fans will likely forgive any flaws for the chance to see romantic flip-flopper Hannah finally walk down the aisle. Author tour. Agent: Meg Ruley, Jane Rotrosen Agency. (Mar.)

A slice of murderCavender, Chris