Blood and earth : modern slavery, ecocide, and the secret to saving the world / Kevin Bales. 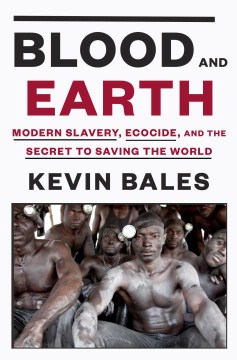 Smartphones and shrimp cocktails, wedding rings and kitchen countertops. When it comes to the stuff we use on a daily basis, what we actually acquire is not what one sees. The hidden sources of all the paraphernalia that dominates everyday life are rooted in a base and barbarous subculture that entraps the most helpless members of societies and destroys the most fragile and essential ecosystems on the planet. Bales (Modern Slavery, 2009), renowned abolitionist and founder of the global antislavery group Free the Slaves, has traveled the world from India to Brazil, investigating the insidious ways in which the most vulnerable members of a culture are exploited by unscrupulous slave masters and their corporate sponsors. Kidnapped and forced into torturous manual labor, kept in servitude by unconquerable debt and the rape of women and children, millions of people sacrifice their lives and decimate precious natural resources to mine commodities that fuel an often-uncontrollable consumer economy. Bales' passionately precise, revelatory, and important chronicle is for every reader concerned with human rights and global ecology issues. Copyright 2014 Booklist Reviews.

Cofounder and past president of Free the Slaves, Bales began noticing that wherever human trafficking took root, environmental destruction soon followed. Here he shows that the two are directly linked via a supply chain he follows right up to our pockets. Bales's Ending Slavery and Disposable People were academic best sellers, translated into ten languages; this broad-ranging book is for readers of Katherine Boo, Tracy Kidder, Bill McKibben, and more.

Modern-day slavery contributes $150 billion a year to our global economy. Though slavery is rejected politically by every country, it thrives among the vulnerable and poor. These defenseless areas of society supporting slave labor are further degraded by widespread environmental destruction. Social scientist Bales (Disposable People: New Slavery in the Global Economy) sets out to explain why there is a direct correlation between modern slavery and environmental degradation. Bales travels from the tin mines of the Congo to the interior of the Amazon rainforest in Brazil to further understand why slave-driven trade has a direct link to global warming. This book documents dramatic accounts of human atrocity as well as stories of hope and empowerment. The author concludes his powerful journey with a reminder that this knowledge gives everyone the ability to end modern slavery and ecocide starting at the consumer level. VERDICT This book is for both academic and public libraries with strong collection development in the areas of social justice, environmental studies, and global studies.—Angela Forret, Clive P.L., IA

Some of the developed world's conveniences and pleasures will seem less enjoyable after reading this exposé of the global economy's "deadly dance" between slavery and environmental disaster. Bales (Disposable People), cofounder of Free the Slaves, follows the supply chain from miners and fishers (often made into slaves by warfare, or into peons by corruption) straight to the cell phones in our pockets, shrimp on our table, and wedding bands on our fingers. Based on extensive travels through eastern Congo's mineral mines, Bangladeshi fisheries, Ghanian gold mines, and Brazilian forests, Bales reveals the appalling truth in graphic detail. This disquieting book is impersonal and objective in its historical and statistical detail—Bales simply says, "It works like this"—which adds immediacy to its general call for reform, with personal accounts from those who produce raw materials and turn them into finished goods. Readers will be deeply disturbed to learn how the links connecting slavery, environmental issues, and modern convenience are forged. (Jan.)

Tropic of chaos: climate change and the new geography of violenceParenti, Christian

Dead aid: why aid is not working and how there is a better way for AfricaMoyo, Dambisa

More from less: the surprising story of how we learned to prosper using fewer resources--and what happens nextMcAfee, Andrew

The great surge: the ascent of the developing worldRadelet, Steven

The locust effect: why the end of poverty requires the end of violenceHaugen, Gary A.

Call them by their true names: American crises (and essays)Solnit, Rebecca

Falter: has the human game begun to play itself out?McKibben, Bill

The devil came on horseback: bearing witness to the genocide in DarfurSteidle, Brian