This is where it ends / Marieke Nijkamp. 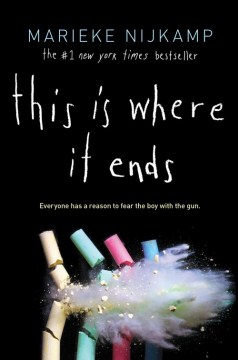 Nijkamp's debut adds to the growing list of novels about school shootings. As Opportunity, Alabama, high-schoolers are welcomed in for a new school year, an armed male student locks the student body inside the auditorium, and then the carnage begins. The subsequent 54 minutes unfold with breathless pacing in the alternating voices of characters who know the shooter: Claire, the track star and former girlfriend of the shooter, who's outside when the shooting begins; Tomás, a troublemaker who rises to the occasion; Autumn, a promising dancer and the shooter's sister; and Sylv, a straight-A student, who is Autumn's closeted girlfriend and Tomás' twin sister. Although the shooter's motivation could have been more developed and the slow response times of authorities require a suspension of disbelief, Nijkamp's story sadly reflects a very real concern in contemporary America. Strong characterizations capture diversity in gender, race, ability, and sexuality. Even reluctant readers will anxiously pursue the ending, unable to turn away from the tragedy and in desperate hope for a resolution, knowing there cannot be a happy ending. Copyright 2014 Booklist Reviews.

At Alabama's Opportunity High, four students give their accounts of a harrowing fifty-four minutes as former student Tyler opens fire on the morning assembly. With narration firmly rooted in the moment and smooth transitions in and out of flashbacks, each first-person account reveals an intricate web of betrayal and pain that connects the four to Tyler and to the horror he has unleashed.

utumn, Tyler's sister, has dreamed of nothing but dance and escape from Opportunity since their mother's death; her girlfriend Sylv, previously a victim of Tyler's rage, has been feeling helpless as her own home life falls apart. Both watch horrified as Tyler indicts the entire school and picks off their classmates and teachers one by one. Outside, Sylv's twin brother Tomás desperately tries to free the trapped students, terrified that he will, once again, fail to protect his sister from Tyler; and Claire, Tyler's ex-girlfriend, having heard the gunshots from track practice, agonizes over her role in fueling Tyler's hate. With narration firmly rooted in the moment and smooth transitions in and out of flashbacks, each first-person account reveals an intricate web of betrayal and pain that connects the four to Tyler and to the horror he has unleashed. Although the alternation among four perspectives can be disorienting, such disorientation is entirely appropriate amidst the novel's brutality and heartbreak. anastasia m. collins

Sometimes the most terrifying horrors are not those involving monsters out of fantasy but those taken straight from today's headlines. Nijkamp's debut follows four high school students on their first day of the spring semester in Opportunity, Ala. Over the course of 54 minutes—the amount of time a gunman holds their school hostage—their lives collide. Each of the four has an intimate connection to the shooter, and all must find a way to face the unfolding tragedy. While Claire views the event from outside the school, Autumn, Sylv, and Tomás are on the front lines. Love, loyalty, bravery, and loss meld into a chaotic, heart-wrenching mélange of issues that unite some and divide others. A highly diverse cast of characters, paired with vivid imagery and close attention to detail, set the stage for an engrossing, unrelenting tale. The starkly chilling realism and themes of abuse, death, and assault, among others, may prove too much for younger or sensitive readers, but the story unquestionably leaves an indelible mark. Ages 14–up. Agent: Jennifer Udden, Donald Maass Literary Agency. (Jan.)

All we can do is waitLawson, Richard, (Film critic)

That's not what happenedKeplinger, Kody

How it went downMagoon, Kekla

All the bright placesNiven, Jennifer