The mystery of the Venus Island fetish / by Tim Flannery. 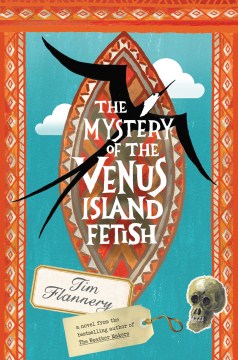 In 1932, when this novel is set, the Venus Island fetish is the most famous artifact in the Pacific Islands. It's an enormous ceremonial mask, shaped like a face and surrounded by 32 actual human skulls. A great controversy surrounds the way it was wrested from the islanders and housed in a museum in Sydney. The hero of this mystery, a young anthropologist named Archie Meek (who is anything but), discovers that some of the skulls on the fetish are discolored, maybe even fresh. Is there a connection between the new-looking skulls on the fetish and the disappearance of three curators from the museum? Flannery, who was formerly the director of the South Australian Museum, makes an already electric tale even livelier with his knowledge of artifacts, digs, and desperate measures taken by cash-strapped museums. The novel is filled with the kind of detail only an expert can bring, like the fact that you can tell ancient Roman statues from Greek ones because the Romans made the second toe the longest. This is a fun, intriguing mystery debut. Copyright 2014 Booklist Reviews.

Famed Australian scientist/conservationist Flannery (The Weather Makers) has fun with a debut mystery that sneaks in some foundational science. Visiting a Sydney museum in 1932, fresh-faced anthropologist Archie Meek notices that an odd discoloration mars several of the 32 human skulls circling a ceremonial mask called the Venus Island fetish. Is someone meddling with the fetish?

Australian scientist and environmentalist Flannery (The Weather Makers) tries his hand at mystery fiction in this 1930s caper. Young anthropologist Archie Meek has returned to Sydney from a yearslong field trip to the Venus Islands and finds his museum in disarray. The board has a frighteningly aggressive new member, his registrar fiancée is furious over his latest love token, and several curators have up and disappeared. On top of that, someone has clearly tampered with the museum's famed Venus Island Fetish, an enormous ceremonial mask decorated with human skulls. Some of the skulls look a little too "fresh" for a historical object. Archie fears that the missing curators might have become a part of the collection and so endeavors to learn the truth while winning back his fiancée and securing his job. VERDICT Ribald and filled with of-the-time views on race, Flannery's debut has trouble keeping a handle on its wide cast of characters. The setting is perfect for a post-Depression farce, and while many of the elements are there, the effect comes off more muddled than effervescent. Flannery/Butterworth clearly considers the pun the ultimate form of humor, so readers with similar sensibilities may find enjoyment here. [See Prepub Alert, 8/17/15.]—Liza Oldham, Beverly, MA

Australian scientist Flannery (An Explorer's Notebook: Essays on Life, History, and Climate) makes his fiction debut with a droll mystery set in 1932 that purports to be a manuscript found in a stuffed baboon. The Great Venus Island Fetish, "the most famous Pacific Islands artifact in the world" (which consists of a monstrous mask surrounded by 32 human skulls), is on display in a Sydney museum, where curator Archibald Meek returns after several years among the Venus Islands natives. To his dismay, Meek discovers that his fiancée, Beatrice, has rejected the love token he sent her made from his foreskin; that four of the skulls in the fetish have been altered; and that four curators have recently gone missing, with a fifth soon to die. Full of petty academic squabbling, quirky personalities, heavy drinking, and secrets and gossip, the plot plays out against a background of supercilious exoticizing of island people. You don't have to be a museum insider to enjoy the fun Flannery pokes at anthropologists of an earlier era. (Feb.)