Even the dead : a Quirke novel / Benjamin Black. 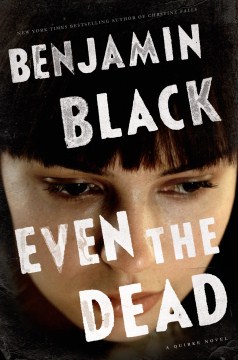 Dublin pathologist Quirke is easily lured from stultifying medical leave when his assistant asks him to consult on a suspicious automobile fatality. The same day, a terrified former classmate approaches Quirke's daughter, Phoebe, claiming she's being hunted by men who murdered her boyfriend, the son of Dublin's most notorious communist. Lisa Smith's claims bear grave weight when she disappears hours after Phoebe hides her in a remote cabin. Quirke, a serial knight in shining armor, renews his battle against abuses by both Dublin's upper class and the Catholic Church in a bid to free Lisa and solve her boyfriend's murder. In Black's hands, Dublin is a mysterious beauty menaced by its powerful elite. Quirke's latest entanglement forces him to revisit some unresolved issues that go back to the series' beginnings: the Magdalene Laundriesatrocity (Christine Falls, 2007; Elegy for April, 2010) and threats from his powerful nemesis, Costigan. Fans will welcome this tying up of loose ends, as Black (a pseudonym for Booker-winning John Banville) crafts a way for Quirke to close the book on some his most troubling personal demonsand even offers the seething pathologist a measure of incongruous happiness. Copyright 2014 Booklist Reviews.

In this seventh in a series from Black, the alter ego of Man Booker Prize winner John Banville, Dublin-based pathologist Quirke investigates when a car slams into a tree one especially hot summer night. Suicide? An accident? He thinks it's neither. Meanwhile, a pregnant acquaintance of his daughter disappears after telling him that she fears for her life, and Quirke finds himself up against a powerful nemesis.

In Black's (pen name of the award-winning novelist John Banville) seventh installment of the series (after Holy Orders), a suspicious car accident and a missing woman pull Dublin pathologist Quirke back into the thick of things. Drying out at his brother's home and fielding awkward encounters with his sister-in-law, Quirke seizes a chance to regain purpose when his daughter Phoebe asks for investigative aid. A young woman, pregnant with the child of the driver killed in the accident, has vanished. Phoebe senses that she is more than just a runaway as all traces of her have disappeared. The introspective Quirke, struggling constantly with the need to drink, unites again with Inspector Hackett to connect the dots. It leads both men into a web of government corruption and religious amorality, with a familiar spider at the center. While Quirke's central narration cast an overarching gloom over previous novels, his surprising encounters here allow for brief rays of sun to shine through. VERDICT The harshness of life in 1950s Dublin remains a stalwart facet of Black's work in the series, and fans will find this next step in Quirke's emotional journey apt. [See Prepub Alert, 7/20/15.]—Liza Oldham, Beverly, MA

Irish author Black's atmospheric eighth novel featuring 1950s Dublin pathologist Quirke (after 2013's Holy Orders) finds a morose Quirke on sick leave and in something of a midlife crisis, convalescing as a houseguest of his adoptive brother, Mal, and Mal's depressed American wife. Quirke's ticket out of the unhealthy situation comes in the form of a suspicious death: that of a young man whose charred body has been found in the wreckage of his car, but with a dent above his left temple suggesting foul play. Meanwhile, a terrified young woman begs Phoebe, Quirke's daughter and a classmate from a secretarial course, for help—and then vanishes. With the aid of his policeman friend, Inspector Hackett, Quirke begins delving into both mysteries, which prove to be related. Black (aka Man Booker Prize–winner John Banville) certainly knows how to spin an engaging, often suspenseful noir, but the plot's overreliance on coincidence and an implausible denouement make this entry of most interest to those already hooked on the series. Agent: Ed Victor, Ed Victor Literary Agency (U.K.). (Jan.)

The long and faraway goneBerney, Louis

The disappearance of Adele Bedeau: a historical thrillerBurnet, Graeme Macrae, 1967-