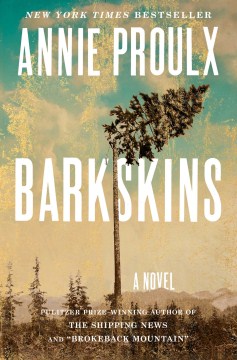 *Starred Review* Barkskins are tree people, which includes not only loggers and foresters but truly all of humankind, given our reliance on these pillars of life. In her copious historical woodland saga, Pulitzer Prize– and National Book Award–winner Proulx tells the stories of those who loved and those who destroyed North America's vast verdant forests. Just as she follows the trail of a musical instrument across America and much of the twentieth century in Accordion Crimes (1996), in Barkskins, Proulx follows the decimating trail of the ax and sawmill, tracking the simultaneous annihilation of the forests and the lives and cultures of Native peoples who had lived for millennia in knowledgeable symbiosis with the wilderness and its sheltering, sustaining trees. Proulx's signature passion and concern for nature as well as her unnerving forensic fascination with all the harm that can befall the human body charge this rigorously researched, intrepidly imagined, complexly plotted, and vigorously written multigenerational epic. The story begins in the dense, mosquito-fierce north woods in New France (now Canada) at the turn of the seventeenth century. Upon their arrival, two indentured Frenchmen, sickly Charles Duquet and sturdy René Sel, are shocked by the harshness of the land and the brutality of their master and soon find themselves caught up in the struggling colony's battles against the Native people, the English, and nature itself. Cunning and ruthless, Charles escapes, while hardworking, upright René stays, perfecting his woodsman skills and becoming part of a mixed-race family. Ultimately, these two men and their descendants embody both sides of the quickly coalescing timber business, the tree cutters and the tree sellers. René and his progeny, many of whom have a deep affinity for trees, suffer the horrors and sorrows of the genocidal war against Native Americans and the traumas of being caught between diametrically opposed legacies. Charles becomes a successful trader, traveling to China, setting up shop in Boston, changing his name to Duke, and establishing a timber dynasty. Proulx's extensive and compelling cast (she provides two family trees) includes many independent women, including Mari, a Mi'kmaq skilled in the use of medicinal plants; tough and generous Beatrix, whose love for Kuntaw forges a long-secret connection between the Sel and Duke families; brilliant and determined Lavinia, who takes over the Duke family timber industry during the steamship and railroad era; and, in our time of environmental crises, forester Sapatisia, who is gravely concerned about the future of the living world. As is Proulx. Other fiction writers have looked to the past and the simultaneous assaults against Native Americans and the North American wilderness for insights into our current ecological dilemmas. Simpatico novels include The Living (1992) by Annie Dillard, Gardens in the Dunes (1999) by Leslie Marmon Silko, Solar Storms (1995) by Linda Hogan, Revenants: A Dream of New England (2011) by Daniel Mills, and Honey from the Lion by Matthew Neill Null (2015).Barkskins is nothing less than a sylvan Moby-Dick replete with ardently exacting details about tree cutting from Canada and Maine to Michigan, California, and New Zealand, with dramatic cross-cultural relationships and with the peculiar madness catalyzed by nature's glory. Here, too, are episodes of profound suffering and loss, ambition and conviction, courage and love. With a forthcoming National Geographic Channel series expanding its reach, Proulx's commanding, perspective-altering epic will be momentous. Copyright 2014 Booklist Reviews.

It's hardly surprising to see the author of the Pulitzer Prize- and National Book Award-winning The Shipping News turn out something so grand. Proulx starts off in the late 1600s with illiterate woodsmen Rene Sel and Charles Duquet, who abandon northern France for New France. Rene marries a Native healer, Duquet eventually travels worldwide as he launches a prosperous logging company, and the narrative weaves together the descendants of both men, plus those of their friends and enemies, as it shows how immeasurably hard life was at the time.

René Sel and Charles Duquet arrive in New France in the 1600s, penniless woodcutters bound to a seigneur (feudal lord), longing for freedom. Duquet escapes to Boston then Amsterdam while Sel is forced to marry Mari, a Mi'kmaw servant. Pulitzer Prize-winning Proulx (The Shipping News; Brokeback Mountain) traces the interconnected Sel and Duquet families through the centuries. Charles changes his surname to Duke and adopts three orphans in addition to having a son, Outger, with his wife, Cornelia. The disappearance of Charles and news of Beatrix—a daughter of Outger living in the Duquet homestead on Penobscot Bay with Kuntaw Sel, grandson of René—galvanizes the adopted sons to subdue a métis claim to fortune. Jinot Sel, who suffers at logging camps in Maine and New Brunswick, finds an enigmatic benefactor. Headstrong Lavinia Duke relocates the business from Boston to Chicago in the 1880s and marries rival Dieter Breitsprecher. Then Dieter's children sell the company after World War II. The Sels dwindle on reservations, wistfully watching their disappearing culture, unaware of their kin. VERDICT Proulx's intricate, powerful meditation on colonialism is both enthralling and edifying, each chapter building to the moving finale. [See Prepub Alert, 11/30/15.]—Stephanie Sendaula, Library Journal

Reviewed by Gabe HabashVery long novels have perennially commanded our attention—Donna Tartt, Marlon James, Hanya Yanagihara, and Garth Risk Hallberg have written four of the most discussed novels of the past three years; they are all more than 700 pages. But Annie Proulx's Barkskins is remarkable not just for its length, but for its scope and ambition—it spans more than 300 years and includes a cast of dozens. It's a monumental achievement, one that will perhaps be remembered as her finest work. Structured in 10 novella-length sections, the book begins with two Frenchmen, René Sel and Charles Duquet, who arrive in New France (now Canada) in 1693 to work for a local seigneur in exchange for land. The first section is about Sel, a born woodsman who fathers three children with Mari, a Mi'kmaq woman. The second follows Duquet, the wilier of the two, who runs away and, snatching up tracts of woodlands in the northeast, founds a timber company in Boston called Duke & Sons. The subsequent sections alternate between each man's bloodline, tracing displacement, resettlement, and death, finishing in 2013. The descendants of Sel battle the erosion of Mi'kmaq culture (at the book's end, their number dips below 1,500), often struggling to adapt as Europeans flood North America, while the Mi'kmaq drift and take labor jobs as they are uprooted. Among the Sels are Achille, René Sel's son and a master hunter, who goes on a moose hunt but finds English soldiers waiting when he returns home, and Jinot, a Sel descendant further down the line, who finds himself cutting huge kauri on an ill-fated journey to New Zealand. Meanwhile, Duquet's descendants take up the family business. James Duke, Duquet's great grandson whose "future flickered before him as a likely series of disappointments," pushes west to find new sources of timber. And James's daughter, the hungry and enterprising Lavinia, perhaps the book's most memorable character, brings unprecedented growth during her time at the helm. The middle of the book can become a bit overwhelming, as the reader attempts to juggle all the new characters and story lines Proulx introduces, but, as in the best epics, the later pages are weighted with all that's come before. Decisions and incidences have ramifications that pop back up again, often hundreds of years later, in astonishing ways. In relating character to setting, repeatedly showing how one influences the other, there are shades of Steinbeck's East of Eden. But the forests are decimated, and characters are summarily, violently dispatched, often offstage. And as years pass in the space of a few pages, it becomes clear that history and time are the main characters here, each moment incremental and nearly insignificant in and of itself, but essential in shaping the world that emerges at the story's conclusion. It's exhilarating to read Proulx, a master storyteller; she is as adept at placing us in the dripping, cold Mi'kma'ki forests as in the stuffy Duke & Sons parlors. Despite the length, nothing seems extraneous, and not once does the reader sense the story slipping from Proulx's grasp, resulting in the kind of immersive reading experience that only comes along every few years. Gabe Habash is the deputy reviews editor of Publishers Weekly. His debut novel is forthcoming from Coffee House Press.

The prophets of Eternal FjordLeine, Kim, 1961-