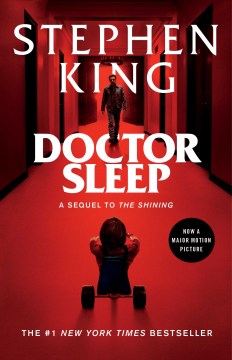 King, not one given to sequels, throws fans a big, bloody bone with this long-drooled-for follow-up to The Shining (1977). The events of the Overlook Hotel had resounding effects upon Danny Torrance, and decades later he's a drunk like his father, wondering what his battle with the "ghosties" was even for. Dan still feels the pull of the shining, though, and it lands him in a small New England town where he finds friends, an AA group, and a job at a hospice, where his ability to ease patients into death earns him the moniker Doctor Sleep. Ten years sober, he telepathically meets the "great white whale" of shining—12-year-old Abra—who has drawn the attention of the True Knot, an evil RV caravan of ­shining-eating quasi-vampires, one part Cooger & Dark's Pandemonium Shadow Show and one part Manson's dune-buggy attack battalion. Though the book is very poignantly bookended, the battle between Dan/Abra and the True's "Queen Bitch of Castle Hell" is relegated to a psychic slugfest—not really the stuff of high tension. Regardless, seeing phrases like "REDRUM" and "officious prick" in print again is pretty much worth the asking price. HIGH-DEMAND BACKSTORY: Even for a King book, this is high profile. The Shining is often considered King's best novel, so even lapsed fans should come out of the woodwork for this one. Copyright 2013 Booklist Reviews.

Remember Danny Torrance, the child protagonist of The Shining? Now he's middle-aged Dan Torrance, settled in a quiet New Hampshire town and working at a nursing home where his remaining "shining" power helps comfort the dying. He's also befriended a 12-year-old named Abra Stone with the shiniest "shining" imaginable and must protect her from The True Knot, quasi-immortals who look like old fuddy-duddies in polyester but in fact live off the "steam" that children with the "shining" produce when they are tortured to death. The 1.5 million-copy first printing says it all.

Since The Shining was published in 1977, it has become an American classic, thanks not only to the book itself but also to the Stanley Kubrick film that it spawned, and King has become one of the most successful horror writers of all time. His latest novel, a highly anticipated sequel to The Shining, marks a return to form for the old master, who reunites loyal readers with Danny (now Dan) Torrance. Decades after the events at the Overlook Hotel, Dan is wrestling with his own demons and putting his psychic abilities to work at a series of nursing homes where he provides comfort to dying patients. When he finally finds a home—and sobriety—in a cozy New Hampshire town, Dan meets a young girl with a shining even stronger than his own. Together, he and young Abra Stone must take on a tribe of people called the True Knot, whose innocent, RV-driving appearance belies their true nature. VERDICT This is vintage King, a classic good-vs.-evil tale that will keep readers turning the pages late into the night. His many fans won't be disappointed. [Previewed in "A World of New Titles," LJ 7/13; see Prepub Alert, 3/4/13.]—Amy Hoseth, Colorado State Univ. Lib., Fort Collins

Iconic horror author King (Joyland) picks up the narrative threads of The Shining many years on. Young psychic Danny Torrance has become a middle-aged alcoholic (he now goes by "Dan"), bearing his powers and his guilt as equal burdens. A lucky break gets him a job in a hospice in a small New England town. Using his abilities to ease the passing of the terminally ill, he remains blissfully unaware of the actions of the True Knot, a caravan of human parasites crisscrossing the map in their RVs as they search for children with "the shining" (psychic abilities of the kind that Dan possesses), upon whom they feed. When a girl named Abra Stone is born with powers that dwarf Dan's, she attracts the attention of the True Knot's leader—the predatory Rose the Hat. Dan is forced to help Abra confront the Knot, and face his own lingering demons. Less terrifying than its famous predecessor, perhaps because of the author's obvious affection for even the most repellant characters, King's latest is still a gripping, taut read that provides a satisfying conclusion to Danny Torrance's story. Agent: Chuck Verrill, Darhansoff & Verrill Literary Agents. (Oct.)