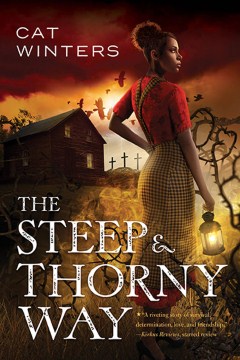 *Starred Review* Hanalee Denney's father has been haunting the crossroads of Elston, Oregon, right where Joe Adder ran him down in his Model T after a night out drinking. Now that Joe's out of prison, Hanalee's ready to get her revenge, but before she can fire the bullet home, Joe convinces her to take a closer look at her stepfather, Uncle Clyde, who married her mother quickly after her father's death. If that plot sounds vaguely Shakespearian, you wouldn't be wrong. Winters retells Hamlet in a grandly realized Prohibition-era Oregon setting, featuring biracial Hanalee in the title role, while the prejudices of the day simmer in the background. Compellingly, Winters doesn't cleave faithfully to the Hamlet story. Instead, Hanalee discovers something far more rotten than a murderous uncle: the KKK are eager to rid Oregon of anyone who doesn't conform to their ideals, and Hanalee, along with her parents and Joe Adder, is at the top of their list. Hanalee's investigation of her father's murder and her growing friendship with Joe are engrossing enough, but Winters amplifies the story by weaving Oregon's troubling true history—state-sanctioned discrimination, eugenics, forced sterilization—throughout the tale, adding weighty, unsettling context to the slow-burning mystery. A powerful, gripping, and exceptionally well-executed glimpse into a little-known corner of U.S. history. Copyright 2014 Booklist Reviews.

In 1923 Oregon, mixed-race Hanalee's father, Hank, was hit by a car and killed. The driver, Joe, returns from prison an outcast, which brings Hanalee and Joe together even though she knows him as her father's killer. When she begins to see Hank's ghost, it leads her to suspect foul play. While the influences from Hamlet are clear, the novel's plot flows naturally. Copyright 2016 Horn Book Guide Reviews.

In 1923 small-town Oregon, Hanalee Denney has some friends, but she's well aware of the prejudice surrounding her. After the death of her African American father, Hank Denney -- apparently from injuries sustained when he was hit by a car driven by young Joe Adder -- Hanalee's white mother married Clyde Koning, the doctor who treated Hank after the accident. Convicted of the murder, Joe has been released from prison and returns to town an outcast, which brings Hanalee and Joe together even though she knows him as her father's killer. When she begins to see Hank's ghost, it leads her to suspect foul play. Was it in fact her new stepfather, not Joe, who killed her father? The more Hanalee investigates, the more she uncovers of her town's shadowy underbelly, including a thriving local Ku Klux Klan chapter that targets not just Hanalee and other nonwhite people but also Joe, who is gay. As in her previous novels, Winters (In the Shadow of Blackbirds; The Cure for Dreaming, rev. 11/14) incorporates historical photos into the text, adding a documentary-like feel. While the influences from Shakespeare's Hamlet are clear, the novel is not so attached to its inspiration that it fails to let its plot flow naturally. The unique setting and thorough research take the book beyond Racism 101: the KKK has it out for anyone who's not "white, Protestant, American-born, or sexually normal in their eyes," and readers might be surprised to learn of the Klan's Rotary-like activities, which allowed it to keep its hate crimes hidden. This is genre-pushing historical fiction that will surprise and enlighten readers. sarah hannah gómez