A gathering of shadows / V.E. Schwab. 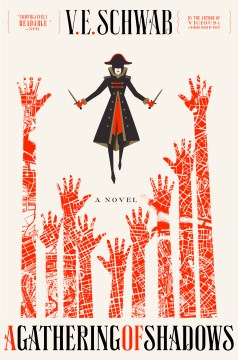 In her second installment of the Darker Shade of Magic series, Schwab delights readers with deeper insight into characters Kell, Lila, Rys, and newcomer Alucard Emery, while continuing to world build the parallel universe Londons. The story picks up four months after Kell's tumultuous adventures with the shadow stone and Lila's fateful arrival into Red London. Kell has given up his smuggling ways, while Lila focuses on sharpening her pirate skills. Just as A Darker Shade of Magic (2015) had a slow plot build, so too does A Gathering of Shadows, in order to set the stage for an amazing crescendo that begins with the Element Games, a magical-abilities tournament. The story has beautiful language, strong characters, and a wee bit of romance, ensuring that fans of the series will not be disappointed in this sequel—until they get to the white-knuckle ending and have to wait for the next installment. Full of magic, intrigue, adventure, deception, a bit of piracy, some epic throw downs, and one incredibly brutal cliff-hanger, this will engage both adult and young adult fantasy readers alike. Copyright 2014 Booklist Reviews.

Former smuggler, dimension traveler, and adopted prince of Red London, Kell struggles with his guilt over the events that resulted in his foster brother's wounds, the Grey London thief Delilah Bard's disappearance, the death of White London traveler Holland, and the dark magic stone found and lost back to its original dimension—Black London. Yet as Red London prepares for its international magic competition, the lost London is emerging from the shadows that consumed it. To keep magic in balance, the return of Black London means that another must fall. VERDICT Schwab's picturesque and fascinating follow-up to A Darker Shade of Magic takes readers back to the worlds of alternate Londons, magic alive, dead, and resurrected, and characters who shine through all of their shadows. Fans of the first book won't be able to put this one down.—KC

Schwab's fantastic follow-up to 2015's A Darker Shade of Magic returns to the linked alternate realities of London: Grey London, our own familiar magic-free city in its Regency era; Red London, where people and magic work in concert; White London, where people struggle for control of magic; and the memory of Black London, destroyed by terrible spells. Lila Bard, a cutpurse from Grey London, has found freedom on the high seas with a privateer who's more than he seems. Kell, a powerful magician with more than a little wanderlust, has given up smuggling between the Londons now that he's magically bound to his brother, the Red prince Rhy. Red London is about to host the Essen Tasch, or Element Games, pitting the most talented magicians against one another; this would be the perfect place for Lila to show off her burgeoning powers, if she can get in—and she's eager to see Kell again, in spite of herself. Meanwhile, in White London, a new king rises, and he will do anything, and sacrifice anyone, to make his London great again. Lila, Kell, and Rhy are complex, fully realized creations who challenge conventional ideas of what a hero should be made of, and the supporting characters feel just as real. New touches such as a bustling magical market enliven already-rich worldbuilding. Tensions rise steadily, culminating with the exciting Element Games, and the finale will leave readers breathless. This is how fantasy should be done. Agent: Holly Root, Waxman Leavell Literary. (Feb.)

Rise of the GryphonKenyon, Sherrilyn, 1965-

Every heart a doorwayMcGuire, Seanan
An accident of starsMeadows, Foz

Blood and iron: a novel of the Promethean AgeBear, Elizabeth

The bear and the nightingaleArden, Katherine