Pit bull : the battle over an American icon / by Bronwen Dickey. 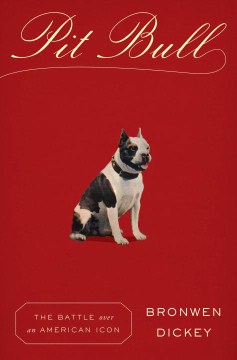 As appealing to readers of history and social science as it is to dog enthusiasts, journalist Dickey's unique first book throws a wide searchlight on the phobia-shrouded dog-breed group familiarly known as "pit bulls." Dickey acknowledges that the opinions she's gathered are sure to challenge or offend some readers and inherent in her supposition is an emotional attachment many humans have to their ideas about dogs. Data-heavy and drawn from experts, Dickey's strata-spanning examination of pit bulls, their reputation and lore, is as much an examination of all dogs and of pets in general and Western societies' attachment to them. With able writing, in tightly packed and thorough chapters, Dickie shares much food for thought, including histories of dogfighting and breed construction, public obsession with violent dogs, how a dog's appearance can dictate human interaction, and much more. Digging deeper, the author considers how pit bulls have been touched by perceptions of poverty and how trends in the dog world follow other media-modeled, societal waves. Dickey's broad scope will leave readers affected and pondering. Copyright 2014 Booklist Reviews.

For almost 200 years pit bulls were considered America's dog, with nicknames such as "nanny dog" and "Yankee Terriers." In the 1970s something went wrong. Journalist Dickey examines the shift from Our Gang's films featuring "Pete the Pup" to monsters "biologically hardwired to kill." The culmination of seven years of research, the title crosses all disciplines from history to genetics; the result is a thoughtful examination of pit bulls and an intense look at ourselves and society. Dickey adeptly scrutinizes the science used to condemn pit bulls to separate fact from fiction and thus weaves a narrative that artfully relays both the hard science and the emotion of the pit bull issue. She also shows how the media and social media kept the "pit bull panic" on a 24-hour loop, preventing the issue from ebbing like previous "breed" panics. The author also articulates how people's expectations of dogs are so high that they are unachievable and the one thing that prevents the most dog bites is education. VERDICT This exceptional, thoroughly researched, and expertly written work is a must for all libraries. [See Prepub Alert, 11/23/15.]—Lisa Ennis, Alabama Coll. of Osteopathic Medicine, Dothan

Dickey, a contributing editor at the Oxford American, didn't know much about pit bulls, other than the fact that some consider them dangerous, until she and her husband adopted one. She became more interested as she looked into the curious history of this unfairly maligned animal. Dickey digs deep, investigating dog fighting and breeding, and interviewing more than 350 people, including dog trainers, animal control officers, and animal behaviorists. Her research illuminates many of the facts and exposes many of the myths surrounding pit bulls and dogs in general. As she quickly learns, a pit bull is more of a body type than a breed; many species fall under the general classification. Further, many of these same animals were considered to be terrific, loving, loyal pets until the early 1970s, when dog fighting burst into the collective consciousness along with high urban crime rates . That resulted in an entirely different perspective on bigger breeds such as rottweilers, German shepherds, Doberman pinschers, and especially pit bulls. Though media-fed panics regarding certain breeds are nothing new, the bad PR surrounding pit bulls has stuck, due to unrealistic expectations of dogs, often unreliable stats, and an always-on media in search of salacious stories. Dickey's immersive and illuminating work deserves a wide audience. (May)