This is my dollhouse / Giselle Potter. 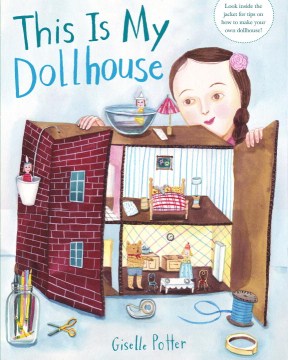 The young, ponytailed narrator has employed plenty of creativity to make her dollhouse. It was once a cardboard box, but with painted bricks, a little box television (with cutouts to change the channel), and a rooftop bowl, er, pool, it's now a comfy home for an eclectic family that includes blond twins and a bear doubling as the dad. The girl's friend Sophie also has a dollhouse, though hers is of plastic perfection, where "everything matches," including the family. When the narrator visits, the girls play, but that house makes them devoid of original ideas. Still, when Sophie comes over, the narrator isn't sure her own dollhouse is good enough. The double-page spread of the cardboard house in all its detailed originality puts that to rest. Readers will wish they, too, could start moving these tiny objects around. Potter's signature artwork sometimes feels serious, and that's true of the girls, though everything connected to the dollhouse feels bright, joyful, and fun. Bonus: illustrated instructions for making a dollhouse! Copyright 2014 Booklist Reviews.

An unnamed narrator built a dollhouse with cardboard, creativity, and whatever she could find around the house; friend Sophie has a store-bought dollhouse, but readers will probably guess which ultimately proves more interesting to play with. The present-tense narration captures the voice of an introspective, imaginative child, but it's in Potter's detailed ink and watercolor illustrations that the book's spirit shines through.

An unnamed narrator owns a dollhouse that she built with cardboard, creativity, and whatever she could find around the house. The wallpaper is drawn in marker; a ribbon and feather become a flapper's headband; a cup-and-string becomes an elevator, which goes up to the rooftop pool -- a bowl of water. Some of these origin stories make it into the text, but others must be surmised from the illustrations, which is half the fun. Friend Sophie also has a dollhouse, but hers is store-bought, with furniture that's meant to be furniture and plastic people who all look the same. The narrator is embarrassed to let Sophie see her dolls' humble abode, but readers and listeners will probably guess which house ultimately proves more interesting and fun to play with. The first-person, present-tense narration captures the voice of an introspective, imaginative child, but it's in Potter's characteristic ink and watercolor illustrations that the book's eclectic spirit shines through. Her wide, big-eyed faces are simple, but there are other details to discover throughout -- items from the endpapers show up repeatedly and serve different purposes. Much like the dollhouse, the book itself invites exploration: check under the dust jacket for tips on building a cardboard dollhouse of your own. shoshana flax

Potter's narrator has lovingly crafted a cardboard box dollhouse and all its accoutrements, including a "plate of noodles" from a bottle cap and yarn. Her dollhouse family is sweetly eclectic, too: a mouse, bear, two fashion dolls, and rag doll, all sharing a large bed. Her friend Sophie's dollhouse, by contrast, is an "all perfect" prefab residence whose inhabitants who are both literally and figuratively plastic. The girl is both appalled and cowed, but Potter (Tell Me What to Dream About) doesn't interpret this emotional turmoil for readers; they'll quickly glean from Sophie's boring, literal play that the dollhouse has stunted the girl's imagination. Happily, Sophie turns out to be a creative spirit yearning to break free, and the narrator's handcrafted house, which she initially tries to hide from Sophie, is just the ticket. As in her previous books, Potter's characters have enigmatic, mini-adult visages reminiscent of early-18th-century child portraits. The realization that creative, outside-the-box artistry can be more inspiring than anything manufactured makes for a wonderful story, one that may motivate future members of the artisanal economy. Ages 4–8. (May)

Penny and her songHenkes, Kevin

Lola at the libraryMcQuinn, Anna