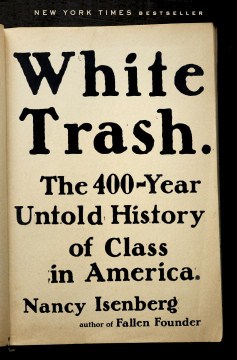 Most people are well aware of what terms are not acceptable when talking about different races or ethnicities. But what about terms denoting class? Isenberg takes a close look at the history of poor whites in America and asks readers why it is seemingly acceptable to use such terms as white trash, crackers, and rednecks to describe this group of people. The narrative goes back to pre-colonial times, when Great Britain realized America could function as one giant workhouse. Poor indentured servants were sent overseas in droves, with the hope that a life of hard work would train their offspring to be better members of society. Benjamin Franklin continued this train of thought, believing that idleness could be bred out of people. Somewhere along the way, though, not everyone got the memo, and the stigma of coming from "white trash" still exists—American exceptionalism be damned. Turning to the present day, Isenberg covers everything from Bill Clinton to country-boy culture to the rise of redneck reality TV. The history here can sometimes be dense, but the author delivers a thought-provoking discourse on an important social issue. Copyright 2014 Booklist Reviews.

Isenberg (Fallen Founder) sets out to find the lower classes that, over time, have been variously cast as degraded, despoiled, and even demented. In doing so, the author argues that their presence and persistence counters the promise of American progress, for it suggests that class was, and is, more resilient than the American Dream would have it. Failing populist moments, the white "trash" remained disfranchised and dismissed, or feared for their supposed debilitating effects on morality. Isenberg takes the long view, from the convicts that the British transported to the colonies to segregationists, "trailer trash," the friendly yokelism and folk "wisdom" of The Beverly Hillbillies and The Andy Griffith Show and now Duck Dynasty. The author largely identifies "white trash" as a Southern phenomenon (the urban poor are not part of the society surveyed) but provides an astonishingly wide and copious canvas by describing the ways "white trash" appeared or were seen as individuals of concern in popular culture, political rhetoric, scientific theories, pseudoscientific policies, and literature. The narrative incorporates people as varied as Lyndon B. Johnson, Harper Lee, and Tammy Faye Bakker to show that the exceptions to the supposed American exceptionalism were, and are, its fundamental fact and foil. VERDICT Essential reading for a new perspective on the role of class in American society.—Randall M. Miller, St. Joseph's Univ., Philadelphia

Isenberg (Fallen Founder: The Life of Aaron Burr), professor of history at Louisiana State University, tackles a topic rarely addressed by mainstream American writing on race and class as she skillfully demonstrates that "class defines how real people live." Opening with a myth-busting origin story, Isenberg reveals the ways English class divisions were transplanted and embraced in the colonies at the expense of the lower classes. Colonization and expansion were accomplished because elites believed the poor were valuable only for the labor they provided for the nation. Isenberg then shows how words such as squatter, cracker, and white trash are rooted in public discussions over politics and land. Eugenics entered the conversation in an early 20th-century effort to breed out misfits and undesirables, and the Great Depression forced reevaluations of poverty and what it meant to be a "poor white" in the 1930s. In the book's final section, a delectable mixture of political and popular culture, Isenberg analyzes the "white trash" makeover of the late 20th century thanks to movies such as Smokey and the Bandit, politicians Jimmy Carter and Bill Clinton, and Jim and Tammy Faye Bakker's televangelism. A Marxist analysis of the lumpenproletariat this is not, but Isenberg's expertise particularly shines in the examinations of early America, and every chapter is riveting. Illus. Agent: Geri Thoma, Writers House. (June)

There goes my everything: white Southerners in the age of civil rights, 1945-1975Sokol, Jason

And their children after them: the legacy of Let us now praise famous men : James Agee, Walker Evans, and the rise and fall of cotton in the SouthMaharidge, Dale

The color of law: a forgotten history of how our government segregated AmericaRothstein, Richard

Stamped from the beginning: the definitive history of racist ideas in AmericaKendi, Ibram X.

A republic of equals: a manifesto for a just societyRothwell, Jonathan