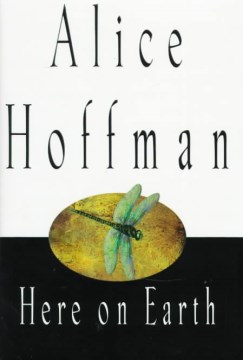 Hoffman's powers of enchantment increase exponentially in each of her cosmically romantic novels. Just as she did in Practical Magic (1995), Hoffman depicts love as a disturbance in the field, but here it is manifested as an unpredictable force of nature that encompasses all extremes, from the chilling pall of winter to the life-and-death properties of fire. Richard, March's sweet but distracted husband, should not have let her return to their small New England hometown with only their teenage daughter, Gwen, for company. He should have known that when March left for the haunted terrain of Fox Hill, she would meet up with Hollis, the jealous and angry boy-man with whom she was so deeply in love as a young woman. Hollis transformed himself from a resentful charity case into a millionaire but left death and despair in his wake and achieved no joy through his success. And he's still obsessed with March, who slips right back into the confines of their passion because Hollis possesses the sort of power that makes women cling and submit. Hoffman walks a fine line between bodice-ripping trash romance and bewitching but intelligent fiction here, but her fluency in the language of the heart and the bruised tenderness of her prose lift her far above cliche, into a luminous realm where the souls of her poignant characters open like moonflowers. ((Reviewed July 1997)) Copyright 2000 Booklist Reviews

From the magical Hoffman: a woman journeys home and into her past. Copyright 1998 Library Journal Reviews

As this novel opens, March Murray Cooper returns to her hometown, ostensibly to bury the woman who raised her but needing to resolve the unfinished business of her youthful love for Hollis, from whom she has been separated for years. Hollis has now grown into a man embittered by loneliness. He has learned neither to forgive nor to forget, and March must discover whether he can ever learn to love. Hoffman (Practical Magic, LJ 12/94) takes great care here to examine the many facets of love and relationships, turning them like a prism to reflect on March and Hollis. Hoffman's evocative language and her lyrical descriptions of place contrast sharply with the emotional scars that her characters must uncover and bear. Her novel is a haunting tale of a woman lost in and to love; it will enthrall the reader from beginning to end. Highly recommended. [Previewed in Prepub Alert, LJ 5/1/97.] Caroline M. Hallsworth, Cambrian Coll., Sudbury, Ontario Copyright 1998 Library Journal Reviews

Often, in her soulful novels, Hoffman (Practical Magic, etc.) lets mystical atmospherics-animals that take on superhuman qualities, intense colors and temperatures, minute vibrations in the air that signal ghosts or spirits-do all the work while her characters behave in strange and incredible ways under the influence of forces outside themselves. In this novel, the characters' behavior, while highly emotional, is initially at least traceable to psychological motivation. Unfortunately, Hoffman abandons psychological credibility halfway through, after which her protagonist, March Murray, behaves like an automaton. When March comes back to her childhood home in a small Massachusetts town after 19 years in California, she is swept with longing for Hollis, her former soul mate and lover who ran away in a fit of pique. March waited for him for three years, then married her next-door neighbor, Richard Cooper. When Hollis finally did return, he wed Richard's sister, who has since died. Hollis now determines to win March back, and she can't resist his single-minded pursuit. Hoffman conveys the mesmerizing lure of a lost love with haunting sensuality; but March's excuses for Hollis's violent personality and for his physical abuse of her and her teenaged daughter, Gwen, are well beyond the willed myopia of even obsessive love. Other love affairs between the housekeeper who raised March and the man who was her father's law partner; and between rebellious teenager Gwen (the best character by far, drawn with delightful realism) are described with much more insight and plausibility. The high drama of this novel, and Hoffman's assured and lyrical prose, may carry the day for readers who can accept the premise that a passionate obsession can make sweet reason, maternal protectiveness and the instinct for self-preservation fly out the window. 100,000 first printing; $150,000 ad/promo; Literary Guild featured alternate; film rights to Douglas Reuther. (Sept.) Copyright 1998 Publishers Weekly Reviews

The light we lostSantopolo, Jill

Where the god of love hangs out: fictionBloom, Amy, 1953-