I let you go / Clare Mackintosh. 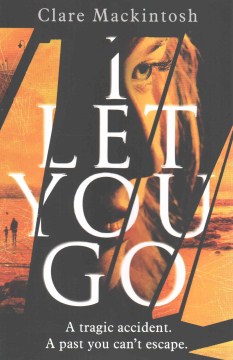 Five-year-old Jacob and his mother, Jenna, are walking home from school when he breaks away and runs into the path of a speeding car. As Jacob lies bleeding in the street, his desperate mother watches the driver accelerate away. Bristol DI Ray Stevens and rookie detective Kate Evans are ensnared by the case, with Kate deeply affected by the driver's callousness and Ray looking to avoid his new management duties. When the few clues from surveillance video and witness statements run dry, the chief orders them to move on, but Stevens and Kate continue to hunt the killer secretly, developing a rapport that turns dangerously romantic. Meanwhile, grieving Jenna flees Bristol and slowly starts to create a new life in a remote Welsh beach village, but the investigation threatens to rip her life apart again. A clever thriller that boasts fine writing, compelling characters, and mind-bending twists; put this one on your list of recommended vacation reads. Copyright 2014 Booklist Reviews.

In this debut, whose author worked on criminal investigations with the Thames Valley Police Department, Jenna Gray moves to the Welsh coast to recover from her child's hit-and-run death, even as two police investigators find the case increasingly complicated. A Richard and Judy summer book club pick and one of Buzzfeed's "Ten Great Psychological Thrillers That Are as Good as Gone Girl"; 300,000 copies sold in the UK.

In her first novel, Mackintosh, a former police detective and journalist, weaves a complex tale out of seemingly straightforward circumstances. On a rainy night in Bristol, England, five-year-old Jacob is killed by a hit-and-run driver. The police are stymied by a lack of witnesses and the disappearance of his mother, who can't bear the guilt of having let her son run ahead toward their home. Jenna Gray escapes to the Welsh coast after that terrible night and slowly attempts to put the pieces of her life back together. Although she believes the accident has faded from police memories, there are two detectives who can't let it go. They pursue slim leads and scant evidence on their own time since the case has officially been declared cold. Their persistence pays off, but that's not the end of the story. VERDICT This UK best seller is a wonderfully layered thriller that skillfully builds from that one tragic event. It makes a good match for fans of Sophie Hannah and Erin Kelly. Highly recommended. [See Prepub Alert, 12/1/15.]—Jane Jorgenson, Madison P.L., WI

At the start of British author Mackintosh's accomplished debut, five-year-old Jacob Jordan lets go of his mother's hand for an instant on a rainy evening in Bristol, England, and darts into the road, only to be struck and killed by a hit-and-run. The investigation lands on the desk of Det. Insp. Ray Stevens and his eager new detective constable, Kate Evans. Mackintosh alternates between the slow, but fruitless, police work and the movements of artist Jenna Gray, who's haunted by Jacob's death and relocates to an isolated Welsh village, where she keeps to herself, warming slightly to the local vet after finding an abandoned puppy, and even then keeping the details of her previous life a secret. Back in Bristol, Ray and Kate work the case to the ground, despite a lack of leads; predictable sparks fly, even though Ray is happily married with two children. Mackintosh easily shifts points of view and keeps readers on their toes, slowly upping the suspense, so that when she does reveal her twists they—mostly—work. (May)